Andocides, On the Mysteries 78 (excerpt from a decree read in the speech)

“…For those who have committed massacres or created tyrannies, in addition to everything else, have the council erase their names everywhere, wherever there is some mention of them in public, in accordance with what we have said and any copy of it which the lawmakers or elected officers possess.”

“Just as in a painting’s colors, we must put the bright and shining matters in the front of the mind and hide and cover the depressing ones away—for it is not possible to erase them or eradicate them completely.”

I have been thinking for some time about the amnesty at the end of the Odyssey, which creates an erasure of the murders of the suitors family so that the Odysseus and his people can escape the cycle of vengeance. There are some echoes of this in the Roman practice of damnatio memoriae. I have thought a lot about Malcolm Gladwell’s application of Mark Grenovetter’s threshold theory to thinking about he sociology of school shootings. I am not sure that erasing events is the solution (nor am I suggesting that Gladwell and Grenovetter think so). What we are really facing in this question is how the stories we tell, how the way we cover events, creates paradigms and narratives that perpetuate themselves.

At the end of the Odyssey, Zeus intervenes and erases the Ithakans’ memory of the murder of the suitors to re-establish peace and stability for Odysseus’ return.

“My child, why do you inquire or ask me about these things?
Didn’t you contrive this plan yourself, that Odysseus
would exact vengeance on these men after he returned home?
Do whatever you want—but I will say what is fitting.
Since Odysseus has paid back the suitors,
let him be king again for good and take sacred oaths.
Let us force a forgetting of that slaughter of children and relatives.
Let all the people be friendly towards each other
as before. Let there be abundant wealth and peace.”

(To be honest, after yet another national tragedy I cannot read Zeus’ words as anything but bitter sarcasm. This is, in all likelihood, an extremely anachronistic interpretation. But I cannot help but wonder if ancient audiences ever heard these lines and were unsettled, if not angered…)

It is clear that Zeus has to do this in order to end the conflict (and end the epic) because both parties are motivated by the cycle of vengeance. When Eupeithes’ speaks to the assembled Ithakans earlier in Book 24, he specifically mentions the fear of becoming an object of shame in a narrative pattern.

“Let us go. Otherwise we will be ashamed forever.
This will be an object of reproach even for men to come to learn,
if we do not pay back the murders of our relatives and sons.
It cannot be sweet to my mind at least to live like this.
But instead, I would rather perish immediately and dwell with the dead.
But, let’s go so that those men don’t cross to the mainland first.”

Eupeithes–and Odysseus for most of the epic–act according to patterns they have received, embedded cultural expectations about how to behave in certain situations. The Odyssey‘s sudden end–its resolution through an act of erasure that challenges the very nature of the genre of memory itself–should prompt us to understand that the conflict has no resolution according to conventional paradigms. Rather than being a simple, closed end, this ending should incite us to realize that the stories themselves have been a problem. 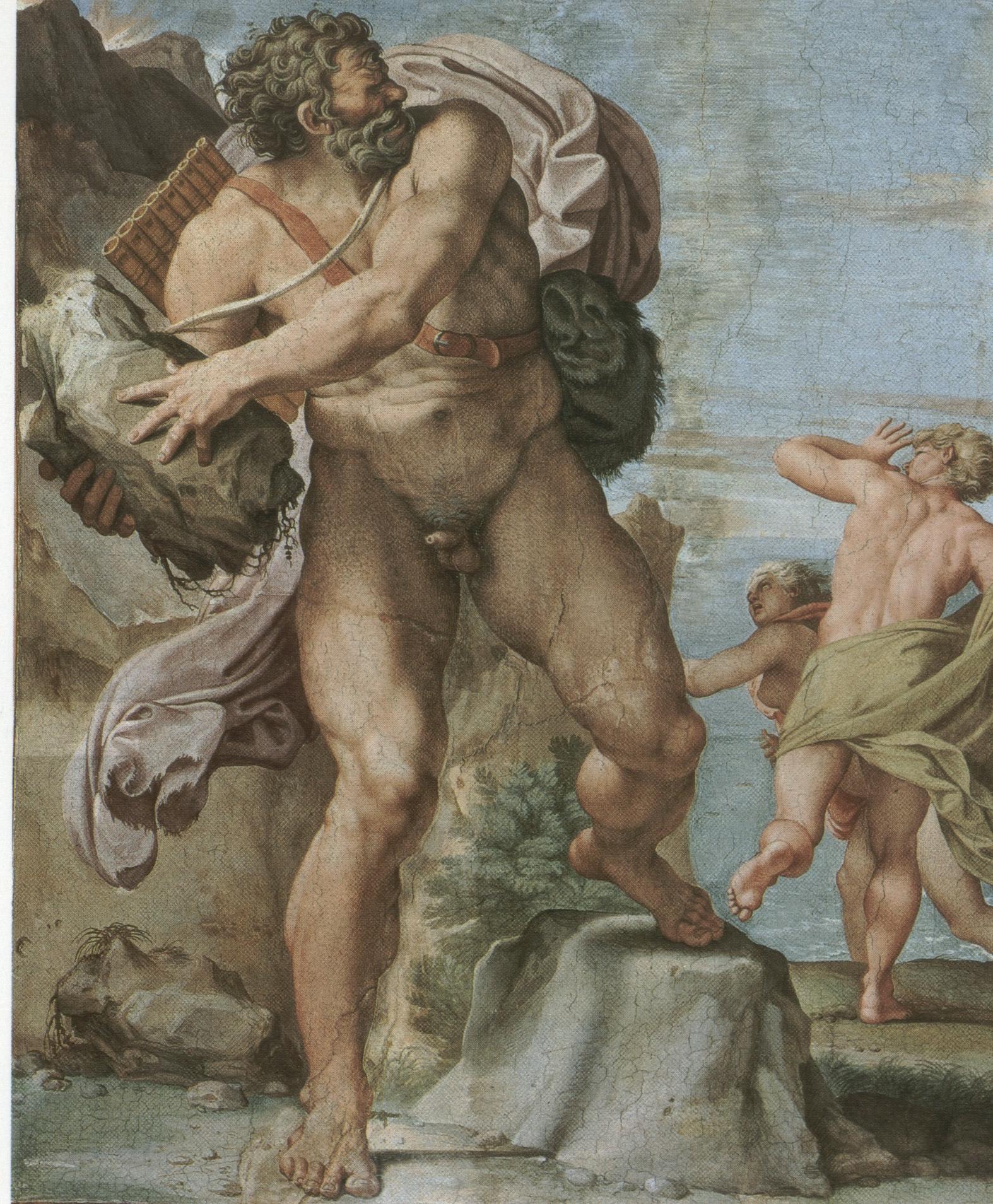 “The Cyclops Polyphemus ,”by Annibale Carracci