According to the following account, Hesiod died for another man’s crimes. His corpse was moved by dolphins.

‘Well, it is really worth hearing. It seems that Hesiod was sharing hospitality and a place with a man from Miletus when they were in Lokris. When the other guy was secretly having sex with their host’s daughter and was caught, he had suspicion that Hesiod knew from the beginning and conspired to hide the offense—even though he was responsible for nothing, he wrongly encountered untimely rage and slander. For the brothers of the girl killed him after they ambushed him near the Nemeion in Lokris, and they killed his servant, named Troilos, too.

After the bodies were pushed out into the river Daphnos, Troilos’ was carried to a boulder washed by water, positioned a little bit out into the sea. And to this day the boulder is called Troilos. A pod of dolphins took Hesiod’s body right away and conveyed it first to Rhion and Molykria. It just happened that the Lokrian sacrifice at Rhion and their assembly, which they hold occasionally even to our time in that place, was in progress at that time. When the body showed up, carried as it was, they were amazed at the chance and they ran down and, when they recognized the corpse since it was still rather fresh, they considered everything secondary to investigating the murder, all because of Hesiod’s fame

They accomplished this quickly by discovering the murderers [a dog went barking and hunting the murderers with a shout]. They put them still alive in the sea and destroyed their homes. Hesiod was then buried near Nemeia. Many people foreign to the region do not know where the grave is. It is hidden because, as they claim, it was sought by the people of Orkhomenos who wanted to transfer the remains to their vicinity in accordance with an oracle.” 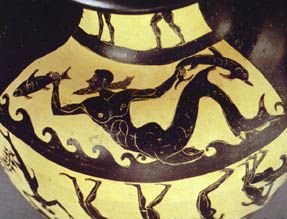