“A teacher should prefer Vergil above all other poets, since his eloquence and glory are so great, that they could be neither increased by anyone’s praises nor diminished by anyone’s censure.”

“Asconius Pedianus wrote a book against Vergil’s detractors, but he nevertheless adds some objections of his own, mostly dealing with Vergil’s narration and the fact that he had taken much from Homer. But he also says that Vergil was accustomed to refute this latter criticism thus: ‘Why did they themselves not try to do take some verses from Homer? To be sure, they would learn that it easier to take Hercules’ club than to lift a verse from Homer.’ Yet, Asconius adds that he decided to retire so that he could do everything to the satisfaction of his malicious critics.”

“I fear that, in my eagerness to show how much Vergil accomplished from his reading of the ancients, and what blossoms and what ornaments he poured forth from all of them into his own poetry, I may accidentally offer an opportunity for criticism to those uncultured and malignant fools who censure such a man for his usurpation of other’s works, not considering that this is the fruit of reading: to imitate those things which you approve in others, and to turn the sayings of others which you marvel at into your own use by a fitting turn. Our poets have done this among themselves, just as much as the best of the Greeks did. And, to avoid talk of foreign precedent, I could show with numerous examples how much the authors of our ancient canon have lifted from one another.”

“And here, I was shocked to find an overwhelming
Flood of new companions, mothers and men,
A band assembled for exile, a pitiable crowd.” 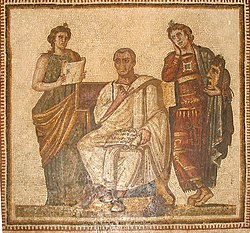