“Do, say, and think each thing as if it is possible to die right now. To leave the discussion of human affairs, if there are gods, it is nothing terrible—for they would not ensnare you in evil. If, moreover, there are no gods—or if the realms of men are not their concern—why would I live in a universe emptied of gods or their foresight?

No, there are gods and they are concerned with the affairs of men. And they have completely arranged it that the human race many not fall into evils that are truly evil. And if there is any evil it what remains, they would have foreseen this too, so that it would not be possible for us to fall into it completely. How can anything make a human life worse which cannot make the person worse?

The nature of the totality could not have overlooked this because of ignorance, or, if knowledgeable, because it was incapable of guarding against or correcting these things. Nor could it have made so much a mistake because of inability or lack of skill that good and evil things would happen to good and evil people indiscriminately. Nevertheless, death and life, fame and infamy, pain and pleasure, wealth and poverty, all these things are indications of good and even among men even though they are not intrinsically noble or shameful themselves. Therefore, they are not good or evil

How swiftly everything disappears—in the universe, the bodies themselves, and in time, their memories with them. What kinds of things are all those sensed goods, especially those that delight us with pleasure or terrify us with pain or are shouted out because of pride! How simple, and despicable, and filthy, and temporary, and dead! It is the mark of our intelligence to recognize this—what these things are whose beliefs and voices obtain fame; what it means to die, and, if a person looks at dying itself and disentangles its phantom fears with a portion of his intelligence, he will suppose that it is nothing else than the work of nature. If the work of nature frightens someone, he is a child.”

Not only does this passage dovetail nicely with the epistle Palaiophron posted earlier today, but it answers a question from a correspondent on twitter who was thinking of a passage from the Meditations that said something about “living a good life, if there are gods”. I looked through the Meditations quickly, but had the suspicion that this was rather un-Aurelian (it sounds Hedonistic or Epicurean rather than Stoic). 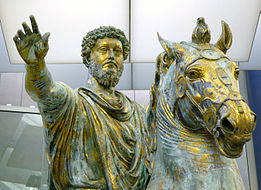 A quick google search brought up the popular passage, which, it turns out, is fake Aurelius (WARNING FAKE QUOTE):

This has been debunked already. The sad part of this, is that the original is much deeper and more interesting than the fake quote. Amusing, if you follow some of the internet discussions: criticisms from people who want to defend the quotation that amount to “Dude, have you even read Aurelius in the original Latin”.