“If you put down a rotten foundation, already falling apart, not even a little shack can be built upon it, and the greater and more forceful thing you build upon it, the faster it will fall to the ground.

So you are depriving this dear person of life without any reason, a citizen of the very same state, both the larger one and the local one. Then, as you commit an act of murder and destroy another human being who did no wrong, you claim that “you have to stick to what was decided!”  If it ever occurred to you to kill me, would you have to stick to your decisions then?

That kind of a person is scarcely persuaded to change his mind. But it is impossible to transform others today. So, now, I think I understand that proverb that used to confuse me, that “you can’t persuade or break a fool!”

May I never have a wise fool as a friend, there’s nothing harder to deal with. He says, “I have decided.” Well, people who are out of their minds decided too. But just as much as they believe that what isn’t true is solid, that’s how much hellebore they need to drink.”

“Whenever someone is haughty because he understands and can explain the books of Chrysippus, say to him: “If Chrysippus hadn’t written so obscurely, you’d have nothing to be haughty about.”

But what do I desire? To understand nature and follow it. Therefore, I seek one who explains it. And because I have heard that Chrysippus does this, I go to him. But I do not understand what he has written. Therefore, I seek out someone who explains him. And within these steps there is nothing worthy of pride. Whenever I find the right interpreter, it is still up to me to practice his precepts. This alone is worthy of pride.

But if I am amazed at this act of explanation, have I done anything but transform into a grammarian instead of a philosopher? (Except, I interpret Chryippos instead of Homer.) Hence, whenever anyone says to me “Read me Chrysippus,” I turn red when I am incapable of demonstrating actions equal to and harmonious with his words

“The truth is an eternal thing and unseen—it does not provide us a beauty which deteriorates with time nor a freedom of speech which is vulnerable to the law. Instead, it provides us with the just and the lawful by separating and refuting injustice from them.”

“[Epicureans] dismiss dialectic as being uneccessary—they believe that it is enough for natural scientists to employ the normal words for things. In his Canon, Epicurus asserts that our sensory perceptions and prior experiences and conceptions are the criteria of the truth; and Epicureans also believe that the imagined movements of thoughts are the same. He articulates his own beliefs in his Brief to Herodotus and in his Kurian Beliefs. He says, “Every perception is free of thought and receptive to no memory. Because does not move under its own power or another’s, it cannot add anything or take it away. And there is nothing capable of refuting the senses. For one related perception cannot countermand another because of their equal power nor can inequivalent senses undermine those of a different capacity, since they are not judging the same domains.

Reason depends entirely on perceptions. Different kinds of senses cannot undermine each other, since we use them all. The interdependence of the senses ensures the truth of what we perceive. Our ability to see and hear is just like our ability to feel pain. This is why we must strive to make meaning about unclear things from what actually appears before us.”

“Just as masks seem frightening and awful to children because of their inexperience, so too do we suffer something similar to current events—it is not different from how children respond to bogeymen. For what is childish? Ignorance. What else is childish? Lack of learning. When a child has learned something, they are no worse off than we are.

What is death? A bogeyman. Turn it around, get personal with it. Look! How can it bite? This little body needs to be separated from the spirit just as it was once before, either now or some time later. Why is it troubling if it happens now? If it doesn’t, it will later. Why? So that the cycle of the universe doesn’t stop. It requires everything that exists now, all things that will happen, and all those that happened before.

What is pain? It’s a bogeyman. Turn it around and get comfortable with it…”

“Similar too is the athlete who was at the risk of dying unless his penis was cut off. His brother—that one was a philosopher—came to him and said, “Come on, brother, what are you going to do? Are we going to cut that bit off and go to the gym still?” He wouldn’t allow it, so died, steadfast in his convictions.

When someone asked, “How did he do that? As an athlete or a philosopher.” Epictetus answered, “As a man. As a man who had been announced at the Olympic games and competed there and was well-suited to that place, not just rubbed down in oil at Batôn’s gym. A different man would have cut off his neck if he could live separate from it. This is what living in alignment with your persona means. It is so strong for those who are accustomed to introduce their own experiences into examinations.

“Come Epictetus, shave!” If I am a philosopher, I say, “I will not shave my beard.” And he answers, “Then I will cut off your neck.” So I say, if it seems better to you that way, cut it.”

“Some one will be said to have spoken badly of you: think whether you did this first; think of how many people you talk about. Let us think, I say, that some are not offending us, but repaying us; that some are doing good for us, that others are forced to act, and some are just ignorant. There are those who do what they do willingly and with full understanding who attach us not for the injury itself: one is either seduced by the sweetness of his wit; other does it not to move against us but because he cannot pursue his own aims unless he moves through us.

Often praise, although it flatters, offends. Whoever reminds himself of how many times he has encountered false suspicion or how many good services fortune has disguised with masks of injury, or how many people he learned to love after hating them, he will not anger quickly. As you are offended each time, say to yourself quietly: “I have done this myself.”

And where would you encounter a judge this just? The one who desires everyone’s wife and believes that it is just enough a reason to love her that someone else has her refuses to have his own wife seen. The traitor has the harshest demands on loyalty and the perjurer is obsessed with lies himself. The devious lawyer despises any charge made against him and the man who thinks nothing of his own shame will not abide the temptation of others. We keep everyone else’s vices in clear view, but own own behind our backs.”

“Always keep in mind that all sorts of people from all kinds of occupations and from every country on earth have died. And take this thought to Philistion and Phoibos and Origanion. Turn to the rest of the peoples on earth too.

We have to cross over to the same place where all those clever speakers and so many serious philosophers have gone—Heraclitus, Pythagoras, Socrates—and where those great heroes of old, the brave generals and tyrants have gone too. Among them are Eudoxos, Hipparchus, Archimedes,  and other sharp natures, big minds, tireless men, bold men, and those who mock the temporary and disposable nature of life itself, like Menippus and the rest.

Think about all these people, that they have been dead for a long time. Why is this terrible for them? Why worry about those who are no longer named? This one thing is worth much: to keep on living with truth and justice and in good will even among liars and unjust men.” 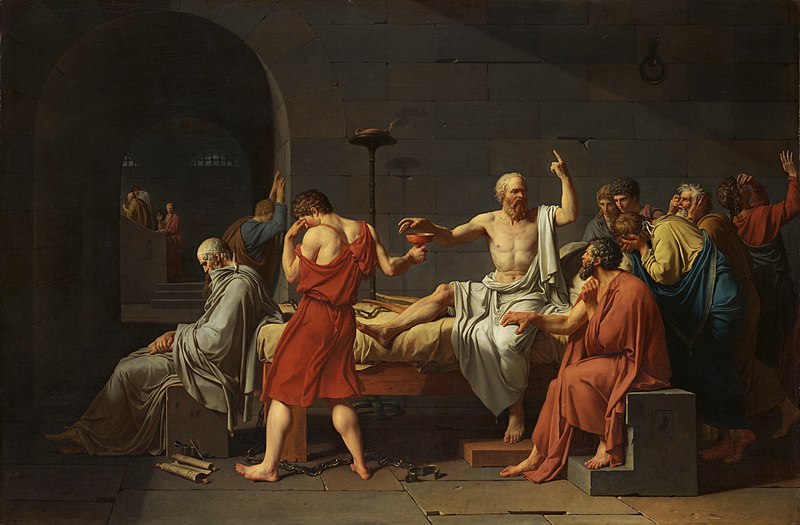 Jacques-Louis David, The Death of Socrates 1787

“Terrify this person, if you find anyone like this, with threats of death or exile. Whatever happens to me in so ungrateful a state will happen without any protest from me, not just without fighting back. For what have I accomplished or what I done or to what end have my anxieties and thoughts kept me awake all night if I have actually pursued nothing at all which puts me in a place that cannot be weakened by lapses in fortune or harm from my enemies?

No, every bit of sorrow and misfortune oppresses you because you think you are happy and wealthy. Your desires torture you; you are in pain day and night because what you have is not enough and you worry that even this bit will not last. Your memory of wicked deeds works away at you; fear of judges and laws make your heart race. Wherever you look, the harms you have inflicted on others assail you like Furies who will not even let you breathe.”

Cicero, Paradoxa Stoicorum: paradox 2: That having virtue is enough for being happy

“No one can be really happy if they rely wholly on themselves and value everything with themselves alone. But those whose reasoning and hope depend entirely on fortune cannot have anything certain—nothing possessed can be expected to last for more than a solitary day.

Threaten that kind of person, should you find one, with these threats of death and exile. In truth, whatever will happen in so thankless a state will happen whether I am protesting or resisting or not. What have I labored over or what have I done or what of my worries and thoughts passing throughout the night, If I have actually accomplished or pursued nothing to put me in a state that rashness of fate or injuries to my friends cannot weaken? Do you threaten death so that I will completely withdraw from humankind or exile so I may abandon the wicked? Death is terrible to those who lose everything along with life but not for those whose praise can never die. Exile is dreadful to those whose home is a mere boundary line but not to those who think that the whole world is one city.”

Epictetus, Discourses according to Arrian 3.18-22

“These are the cruel beliefs that need to be excised, what we need to focus on completely. What is weeping and groaning? A kind of judgment. What is bad luck? A belief? What is conflict, nitpicking, accusation, sacrilege, nonsense? These are all just beliefs and they are also beliefs that sit outside the selection of what is actually good and evil. Have someone change their focus to these real things and I promise they will stand fast no matter what things change around them.

The soul is a bit like a bowl of water and its experiences are like the ray of light that dances on the water’s face. When the water is rough, it seems like the light is disturbed too, even though it isn’t touched. Just so, whenever someone suffers a moment of darkness, their skills and virtues aren’t all mixed up, just the breath in which they subsist. When it finds peace again, so do they.”