“Perikles was a student of Zeno the Eleatic too, the one who concerned himself with nature in the manner of Parmenides. and who practiced a type of refutational logic which would trap his interlocutor.  He was, as Timon of Phlias quipped, “a man whose tongue worked both ways, with irresistible fury, Zeno, a universal prosecutor”.

But the one who spent the most time with Pericles and who chiefly endowed him with a stature and outlook more impressive than any demagogue’s and who totally raised up and praised the worth of his character was Anaxagoras of Klazomene. He was a man people of that time called the Mind because either they were amazed by his understanding which appeared so great and nuanced regarding nature or because he was the first who didn’t make chance or necessity the ruling force of the universe but instead Mind in its pure and simple form…” 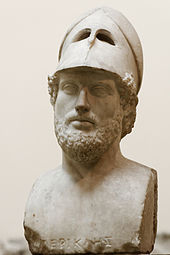