“You must weave an end fit to the beginning. Whoever defeats Marcus Antonius will win the war. That’s why Homer called Ulysses the “city-sacker” instead of Ajax or Achilles”

“But, I digress. Some people believe that Ulysses was taken by that long and fantastic journey and arrived in the German lands. Asciburgium, which is still inhabited on the banks of the Rhine, was founded by Ulysses and named by him. They add too that an altar was built and given the name of his father Laertes, which was found in the same place once. There were also monuments and certain mounds inscribed with Greek letters—these can be found still on the boundary between Germany and Raetia. I do not intend to confirm or refute these things with evidence—let everyone diminish or increase belief from his own inclination.”

“You ask, ‘where did Ulysses wander?’ rather than trying to ensure that we are not always wandering? We don’t have the time to listen to whether he was tossed between Italy and Sicily or beyond the world we know—indeed, so long a journey could not happen in such constraint—storms of the spirit toss us daily even as our madness compels us towards Ulysses’ sufferings. We never lack beauty to distract our eyes, nor an enemy; from this side wild monsters delight in human flesh too and from that side evil charms our ears. From another quarter still expect shipwrecks and every kind of evil. Teach me this instead: how I might love my country, my wife, my father, and how I may find my way to these true ports even when shipwrecked?” 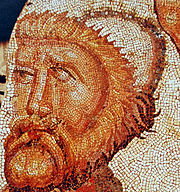