This week, we turn to the most tragic of epics (according to Aristotle, at least), Homer’s Iliad 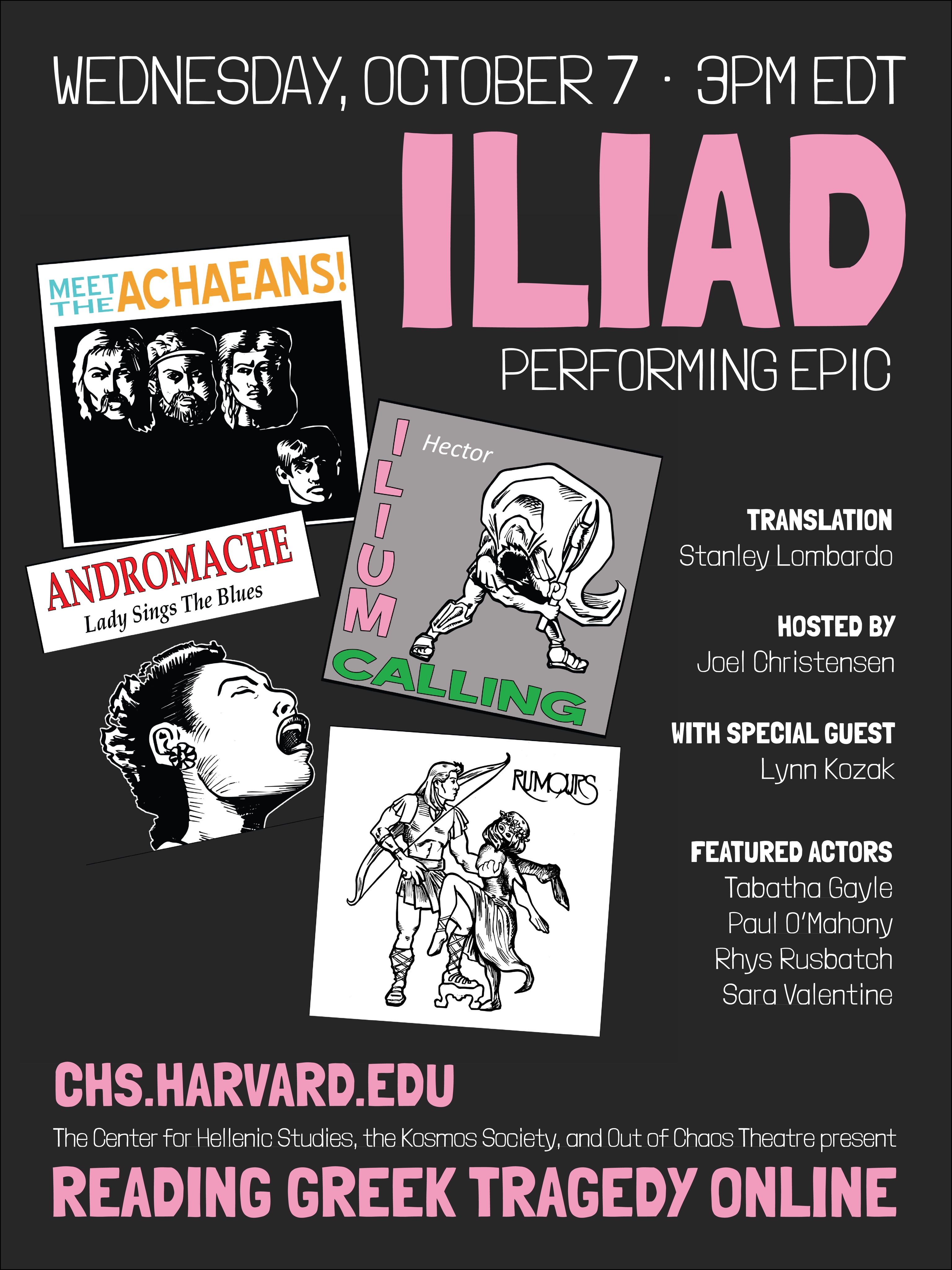 As everyone knows, the Iliad begins with the rage of Achilles. As many of us forget, it ends not with the Trojan Horse or the death of Achilles, but instead with the burial of horse-taming Hektor. I think it is probably dangerous to ask a Homerist to tell you about the Iliad, because so often we don’t know where to start, whether it should be in thinking about its relationship with the Odyssey or about what it means to say the word “Homer”. True Story: many years ago, while patronizing a drinking establishment in Queens, my wife asked me to tell her what the Iliad was about. After about 45 minutes, she asked how much more there was to it. I had not even finished book 1 yet…

Ancient performers of the epics didn’t have these challenges because audiences grew up hearing stories about most of the events and characters they would be singing about and because the performance contexts didn’t expect them to tell the whole story. We don’t know a lot about the actual performance contexts and practices of Homeric poetry in the ancient world (see the work of José Gonzalez on rhapsodes, Casey Dué’s work on multiformity, Egbert Bakker’s From Formula to Poetics or any of Gregory Nagy’s Poetry as Performance or Plato’s Rhapsogy and Homer’s Music), but it seems likely that the stories were performed in episodes at various occasions and at times in monumental performances at festivals. How these performances were prepared is another issue: some think they were memorized from a script, others think they were composed in performance. I tend towards the latter belief with the acknowledgement that even when something is composed in performance, there are various degress of fixity from one performance to another and one singer to another…

And, here again, I have started to trail off. Often people talk about performance of song within Homer to start us thinking about epic performance (the songs of Demodokos and Phemios in the Odyssey; Achilles singing to his lyre in the Iliad) but there’s some evidence outside the poems too. One passage comes from Plato’s Ion:

Socrates: What is this then, Ion? Should we say that a person is in their right mind when they are all dressed up in decorated finery and gold crowns at the sacrifices or the banquests and then, even though they haven’t lost anything, they are afraid still even though they stand among twenty thousand friendly people and there is no one attacking him or doing him wrong?

Socrates: So you understand that you rhapsodes produce the same effects on most of your audiences?

Ion: Oh, yes I do! For I look down on them from the stage at each moment to see them crying and making terrible expressions, awestruck by what is said. I need to pay special attention to them since if I make them cry, then I get to laugh when I receive their money. But if I make them laugh, then I’ll cry over the money I’ve lost!”

Note in this passage that Plato’s Socrates assumes that Ion is faithfull performing a ‘text’ ascribed to Homer and that they both identify as salient features of the performance the context (“sacrifices” and “festivals”) the emotional affect (crying and carrying on, channeling the emotive content of the scenes) and the impact on the audience (making them cry too) all while emphasizing the material benefit accruing to a rhapsode who pleases his audiences.

When I think about Homeric performance, I think a lot about how little we know about the audiences and their responses and how crucial this was to the shape of the poems we have. I too often forget that the performers were an important part of this process in shaping the reception through their use of intonation, voice, gesture, and tune. So, in our readings from the Iliad today, I will be thinking about the parts, and not the whole, and how performance creates a new text of its own.

We’ve selected some passages today for performance from different parts of the epic to give an idea of the power of the whole and to provide a range of characters for our actors. We will get some of the debate in book 1, some family scenes in Troy, and a whole range of lament and regret. What more could one ask for a Wednesday?

“But, you great shamepot, we follow you so that you feel joy,
As we collect honor for Menelaos and you, dog-face,
From the Trojans—you don’t shudder at this, you don’t care.”

“Wine-sod! Dog-eyes! You have the heart of a deer!
You never suffer to arm yourself to enter battle with the army
Nor to set an ambush with the best of the Achaeans.
That seems like death itself to you!”

“After a while, Diomedes good-at-the warcry, addressed them:
“I will fight with you first because you are being foolish, son of Atreus,
Which is right, Lord, in the assembly. So don’t get angry at all.”

“Then lord Apollo the far-shooter answered,
“Earthshaker, you would not think that I would be prudent
If indeed I fought with you over mortals,
Wretched men who are like the leaves now flourish
Until they grow full, eat the fruit of fields,
And then they diminish until they die…”

“Achilles, respect the gods and take pity,
Once you think of your own father. I am even more pitiable,
Since I endure what no other mortal person ever has,
To reach my hands to the lips of the man who slaughtered my child.”

“You, child, will also either follow me
Where you will toil completing the wretched works
Of a cruel master or some Achaean will grab you
And throw you from the wall to your evil destruction
Because he still feels anger at Hektor killing his brother
Or father or son, since many a man of the Achaeans dined
On the endless earth under Hektor’s hands.”

“After heaping up the mound [sêma] they returned. Then
Once they were well gathered they shared a fine feast
In the halls of the god-nourished king, Priam.
Thus they were completing the burial of horse-taming Hektor.”