In book 19 of the Odyssey, Odysseus (in disguise) confirms for Penelope that he saw Odysseus (in the past) as he was traveling to Troy by describing the woolen cloak and golden brooch he was wearing. Fewer than two hundred lines later, Eurykleia recognizes Odysseus by his scar. In Greek, the words used for the “wool”[oúlê] cloak and the scar [oulé] differ only in accent. Later in the Odyssey, Dolios uses another word that sounds the same but means something else to address Odysseus. How might audiences distinguish between these meanings? How might the epic capitalize upon their similarity? (see below for some answers)

“Glorious Odysseus had a purple wool [oúlên] cloak with a double fold
And the brooch on it was made of gold with double clasps
On the surface it had an intricate design.”

“Immediately he pondered in his heart how she might not take him
And recognize his scar [oulén] and bring everything out in the open.
But she came near and took him up for bathing. Immediately
She recognized the scar [oulén] which long ago a boar gave him with its white fang
When he went to Parnassus to see Autolykos and his sons.”

“Be well [oule] and be of great cheer. May the gods give you blessings”

How might audiences tell the difference between these two words in addition to accent? Usage in the hexameter line indicates some separation. “Scar” tends to come at the beginning of the line:

“Woolly” tends to come before a caesura:

The one exception to this separation in the Odyssey seems to be when Odysseus is transformed into a better looking version of himself in books 6 and 23. Here, the “woolly hair” begins the line, placing the same sounds in the same position as his defining scar.

“She made the woolly hair come from his head like a hyacinth flower.”

In this, Dolios’ hapax legomenon greeting to Odysseus seems potentially playful and interesting: οὖλέ τε καὶ μέγα χαῖρε, θεοὶ δέ τοι ὄλβια δοῖεν. Here the imperative could sound like a vocative for “wool”. But, it might also recall another word that sounds the same, οὖλος “destructive”, which appears in the Iliad but not in the Odyssey.

Ancient authors associate this imperative with “wholeness, and healthiness”:

“The Milesians and Delians call Apollo Oulios, as if he his a bringer of health and healing. For, to oulein is to “to be healthy” [hugiainein], from which we get the word “scar” [oulê] and the [greeting] “be well and be very happy”.

The aural similarity between these four terms (“scar”, “wool”, “ruinous”, “whole”) and their potentially intentional juxtapositions and interplay in the Odyssey help to map out different variations on Odysseus’ character and his development in this particular epic. In folk etymology, the name  (whence Roman Ulysses through Doric Olisseus?. cf. Oulikseus below “Alternatives…”) may mark him as the “scarred man”, evoking the tale of his naming and thus an essential aspect of his character.

The “wool” may recall both his physical trait of curly hair (emphasized in his rejuvenations in the Odyssey) and his legendary tale of sneaking out under a ram after the blinding of Polyphemos (depicted in many vase images at an early period and perhaps echoed when Priam describes him as a “ram among the sheep” in the Iliad  3.197–198). But the “wool garment” has intra-textual relevance within our epic (since Odysseus in disguise keeps asking for a cloak) and as the garment that confirms his past identity to Penelope.

Both “scar” and “wool”, then, are intimately connected with the characterization of an Odysseus from a broader mythical perspective and are introduced as positive identification for the hero in this epic.  The echo of a “destructive” hero is mostly up to speculation. The meaning of the final imperative “be whole”, however, might be intentionally jarring and telling: at this moment, Odysseus has finally confirmed his identities with everyone and has become whole, combining and transcending his identities as “woolly haired” and “scarred”. 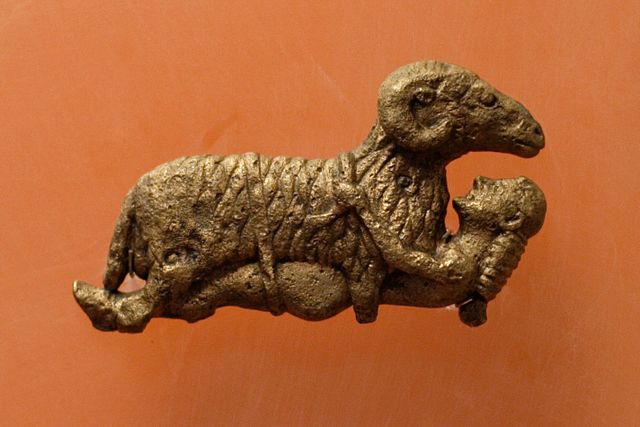 “Scar” (oulê): This is a healed wound which is still apparent. Others call it a “persistent/painful wound” [epiponaion]”

“Scar and wound [ôteilê] are different. For a ‘scar’ is a strike healed from an earlier wound; whereas a ôteilê is what the wound [trauma] is called. But Homer has obscured the difference when he said “the same mark [oulê] poured out black blood from the wound [ôteilês].”

“Scar”: Attic speakers call a wound that has been healed  ôteilê. In Homer, ôteilê is unhealed, and an oulê is healed.”

For other etymologies for Odysseus’ name, see here.

“Têlemakhos called the swineherd over to him and addressed him,
Once he took the whole [oûlon] loaf from the fancy basket”