In the Helen, Euripides pursues the version of events favored by Stesichorus and mentioned by Herodotus too: that Helen was replaced by a cloud-Helen (whom I call a Cylon). The fake-Helen went to Troy while the real one went to Egypt.

Apparently there was also a tradition that has Aphrodite pulling a Zeus-Amphitryon trick with Paris and Menelaos.

“Priam’s child Alexander  left Asia and went to Sparta with the plan of abducting Helen while he was a guest there. But she, because of her noble and husband-loving character, was refusing him and saying that she would honor her marriage with the law and thought more of Menelaos. Because Paris was ineffective, the story is that Aphrodite devised this kind of a trick: she exchanged the appearance of Alexander for Menelaos’ character to persuade Helen in this way. For, because she believed that this was truly Menelaos, she was not reluctant to leave with him. After she went to the ship before him, he took her inside and left. This story is told in Nikias of Mallos’ first book” 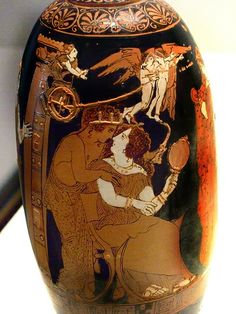 This kind of doubling and uncertainty about identity is certainly at home in any discussion of Euripides’ Helen (well, at least the first third where no one knows who anybody is). But it is also apt for the Odyssey where Odysseus cryptically insists (16.204):

“No other Odysseus will ever come home to you”