“These well-known speeches have so many unclear and odd phrases that they barely make sense….”

“One could easily count the number of people who are able to understand all of Thucydides, and even these people need to rely on a commentary from time to time.”

Recently, my friend Mimi Kramer (@nhmeems) was asking about a pretty famous line from the Melian Dialogue. I looked it up and then my brain started hurting. I went to sleep, and looked again. Here are the Athenians speaking to the Melians:

“Now, we ourselves will not provide a discreditable length of arguments with noble words that we rule justly because we threw off the Persians or that we are attacking now because we were done wrong by you; nor do we think that you should think you are able to persuade us by claiming either that you did not campaign with the Lakedaimonians when you are their allies or that you did us no harm. No, we each should say what we think is possible to accomplish in truth, because we know that what is just is judged in human reasoning from equal compulsion: those who are in power do what they can and those who are weak allow it.”

Here are some translations of the last few phrases:

Benjamin Jowett: “the powerful exact what they can, and the weak grant what they must”.

Thomas Hobbes “They that have odds of power exact as much as they can, and the weak yield to such conditions as they can get”

The recent translation below, to my taste, does a much better job of not forcing a parallelism into the objects of the last two phrases

Johanna Hanink (How to Think about War, 2019: 169): “We need to accomplish what we can on the basis of what we really think, each side fully aware that justice is only a factor in human decisions when the parties are on equal footing. Those in positions of power do what their power permits, while the weak have no choice but to accept it.”

The last phrases cause some fits because there is no clear object for the verb ξυγχωροῦσιν. Warner, Jowett, and Hobbes seem to have taken δυνατὰ with both πράσσουσι and ξυγχωροῦσιν. While Greek (and Thucydides) is certainly capable of implying this, I think Hanink’s translation is much better for this.

When I try to teach Greek prose analysis to students, I do what I learned from Hardy Hansen (yes, the Hardy Hansen): Kola kai kommata! Break the sentences into levels of subordination and try to find the rhythm and parallels. This speech is actually kind of simple on a structural level (for Thucydides). What makes it bedeviling are some of the individual phrases. I have moved a few phrases to show how the sense works:

I am really unsure if it is possible to convey the [forced?] antithesis between δίκαια μὲν and δυνατὰ δὲ in English! (Or what about the repetition τὰ δυνατὰ…δυνατὰ δὲ ?). But, you know, Thucydides is trying to give an idea of the kinds of things people were likely to say….

“In respect to however many speeches individuals made, either when they were about to start the war or were already in it, it is hard for me to replicate with precision what was said—and this applies both to the things I heard myself and those from people reported them to me from elsewhere. So the speeches are presented as each speaker would seem to speak most appropriately about the material at hand, and when I am able to, as close as possible to the total sense of what was actually said.” 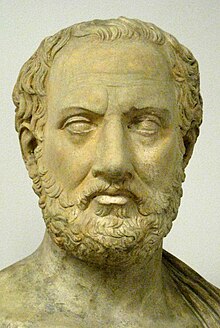