So Catullus begins his infamous sixteenth poem, which may stand scrutiny to this day as the most terse and elegant defense of aesthetic obscenity ever penned. The general purport of the poem is this: Two censorious critics, Furius and Aurelius, have upbraided Catullus for the lascivious nature of his verses. Catullus responds by playfully bandying about obscene threats, and notes that “it is fitting that a poet be chaste, but his verses need not be so,” adding further that they are rendered all the more charming by their very obscenity. Catullus urges us not to be blockheads or amateur readers – he urges us to separate the author from his work.

Surely, this is a sentiment which even modern readers can readily appreciate. Stern Catos, begone! The Culture Wars may still rage on in this country, but the warm embrace offered by Evangelicals and other cultural conservatives in America to a man who resembles a rotten apricot, oozing the putrescent slime of every 1980’s porn fantasy, suggests that they never cared about culture (or at any rate, certainly not about prurience or obscenity) in the first place. As so often happens, a prudish and censorious attitude has served as little more than a pose taken to lend a veneer of moral respectability to the overarching project of gaining power over the human body. Thus, ostensibly conservative critics may in fact feel very little cognitive dissonance between their stated views on the morality of explicitly sexual content in art and their support of a man so eager to commit sexual violence.

One might think that, of all subjects, ancient literature would surely have little to do with this moral and intellectual conflict. Many people whom I meet are surprised that anyone still reads ancient texts at all, and seem wholly unaware of the fact that many of the texts which are deemed ‘canonical’ contain substantial amounts of material ranging from the moderately raunchy to the most blatant smut. Young students of the Classics are often wholly taken aback when they are first exposed to the more prurient side of ancient literature. I recall entertaining a vague notion in those benighted days of my youth that Greek and Latin poetry were lofty and elevated, sublime and beautiful. And so they can be. Yet, there is also a certain artistry in the perfectly executed bawdy joke or sexual epigram. You may consider tossing out Aristotle and Longinus, because Martial – an actual poet – has given us the final word on poetics:

“Cornelius, you complain that I write poems which are not serious enough, and which a teacher would not read in school: but my poems, just like a husband with his wife, cannot please without a penis.”

Poems which a teacher would not read in school? If this was true in Martial’s time, how much more perilous is it in an age still influenced by the dark vestiges of our Puritan past? I would not dare to let my students read Catullus 16 or indeed any of my favorite ribald and raunchy writings of antiquity because I would, if at all possible, like to remain employed. And yet, I know that exposure to such poems was one of my most thrilling intellectual experiences as an undergraduate. And yet, I know that these students already hear far worse in their various entertainments. And yet, it is absurd to pretend that there is something fundamentally wrong or immoral about obscenity, whether it simply be puerile bathroom humor, or prurient sexual jokes. Indeed, I conjecture that obscenity ought to be introduced to the young as alcohol should – under guidance and supervision, to ensure the development of respectful and responsible use. We have all known the friend in college who, upon first letting the sweet gift of Bacchus touch their lips, was then wholly unable to enjoy alcohol temperately. Yet, we also know those who learned a sense of discretion and moderation by being taught how to drink. Similarly, if our cultural critics have noticed a descent into base, crass, immoderate obscenity, it may be because the subject is never discussed with our children in any reasonable or intellectualized light; it is, rather, entirely forbidden to them, until they expose themselves to the cheap and pre-fabricated obscenity available everywhere. Martial understood that a form of refined and polite obscenity was characteristic of the urbane and educated reader:

“You who are too stern a reader can go away now; I have written this for the sophisticated Roman.”

Classics, like many Humanist disciplines, is steeped in the old Arnoldian tradition of citing the appeal of “sweetness and light” as a potential reward for countless laborious hours of nasal-codical union. Gentle reader, I invite you to recall your own mindset as a teenager, and consider whether loftiness and sublimity would have been appealing enough to goad you on to writing out declension charts; surely, conjugation would have proved far more interesting. I would not have students exposed to a constant barrage of obscenity, but given how much of the surviving corpus of ancient literature contains at least some prurient material, I would submit that we should avoid the opposite extreme exemplified by Fordyce’s “school friendly” edition of Catullus, which omitted 32 poems from the already exiguous collection of surviving work.

My students regularly ask whether I will teach them some “Latin swear words,” but I am forced to fall back upon the old expedient of telling them that they will simply have to comb through the dictionary if they want them. Perhaps there is some pedagogical merit in this – I remember scouring Webster’s Dictionary in third grade for the word boobs, which, as I reflect upon it, seems to have become a piece of wholly outmoded slang. Yet such, such were the joys! Though my nascent curiosity regarding sexual matters was hardly gratified by this memorable ramble through the groves of lexicography, I do recall adding to my store of knowledge an avian species and a variant word for ‘fool.’ This could hardly compensate for my disappointment at the time, hoping as I did that a definition bearing more upon mammaries would be attended by an illuminating illustration, but I suppose in retrospect that the experience was, on the whole, educational. Prurient interest here functions much like the honey which Lucretius likens to his verse – a sweetener to make the medicine less bitter. Nurses

Primarily on the basis of its infamous Nausikaa episode, James Joyce’s Ulysses was for some time banned in this country on the basis of its “obscenity.” To be sure, people were then, just as now, still masturbating, shitting, and fucking, but it all seemed somehow indecent to read about those things. The standard applied here was the Hicklin Test, which defined obscenity as anything which tended “to deprave and corrupt those whose minds are open to such immoral influences.” Though it would no doubt appear otherwise to cultural conservatives, I am highly suspicious of the notion that art and literature more generally are capable of exerting a corrupting influence on the mind or morals, and would fall back upon a variant of the Catullan defense: just as one ought not confuse authors with their works, so too one ought not to suppose that “you are what you read.”

Granting the premise that exposure to obscenity might alter our characters, I would submit that it does so for the better. How many literary and artistic geniuses have dallied with filth? How many prurient censors have contributed anything meaninful to human civilization? Conjectural etymology suggests that Latin obscenus is derived from caenum, “filth.” Is filth not just as much a part of our human experience as the loftiness and sublimity of duty, honor, love, etc.? Cicero once wrote of Cato that he “gives his opinion as though he lives in Plato’s Republic, not in the shit-heap of Romulus.” [dicit enim tamquam in Platonis πολιτείᾳ , non tamquam in Romuli faece sententiam, ad Atticum 2.1.8]. I would side with Joyce over John Sumner, with Catullus over Cato, and with all of those who readily embrace the full range of human experience over those who would willfully ignore such an important and entertaining part of human life.

“Lucretia blushed and set aside my book in front of Brutus. But Brutus, go away – she will read it again!” 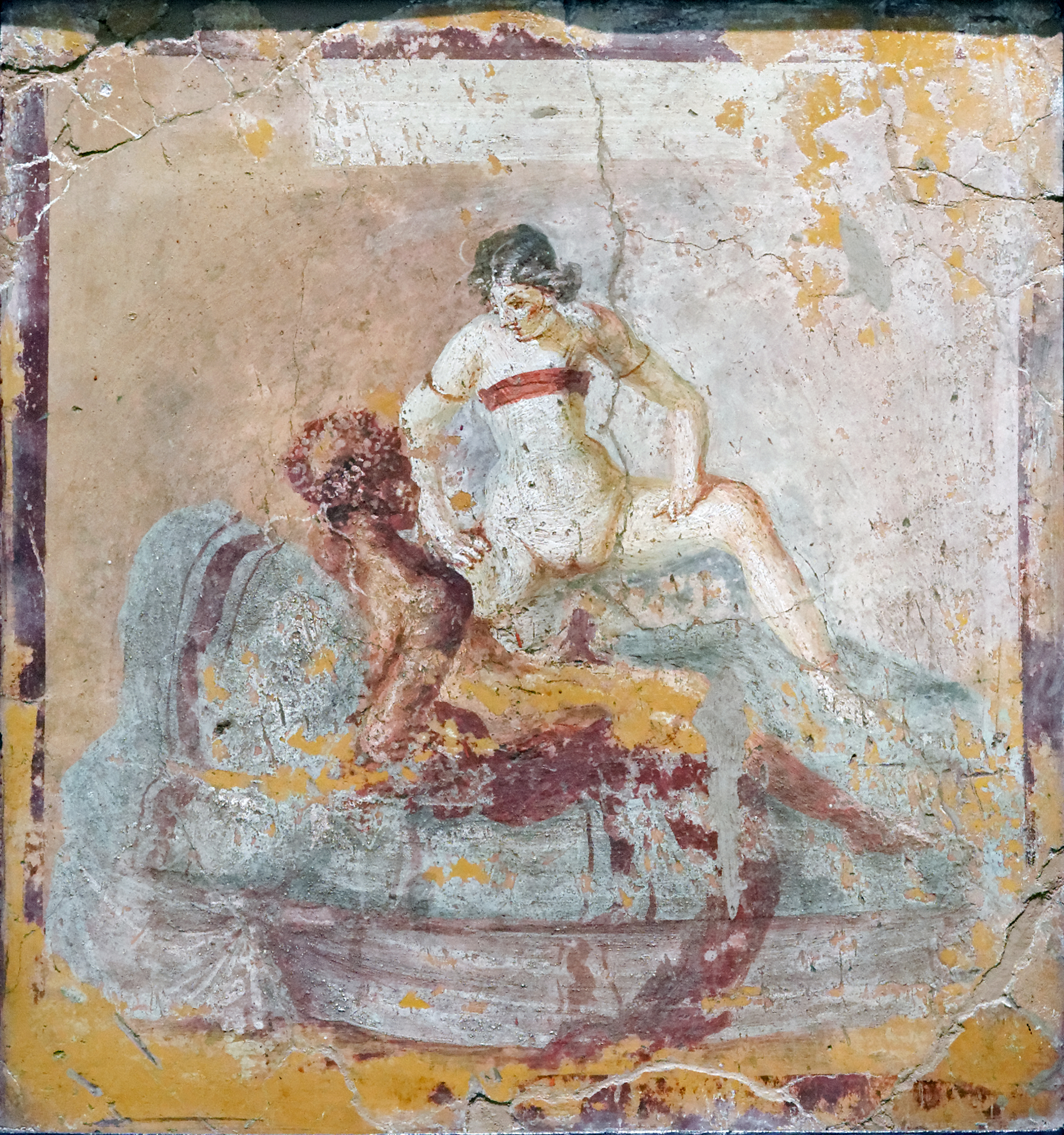 10 thoughts on “In Defense of Obscenity”