“What good is it to conquer many in boxing or wrestling only to be overcome by own own anger?”  -Seneca the Younger, Moral Epistles 88.19

During the funeral games in the Iliad, the victor in the boxing match, the older Epeios—who is described as the “son of Kapaneus, a man knowledgeable in boxing” (εἰδὼς πυγμαχίης υἱὸς Πανοπῆος ᾿Επειός, 23.665) knocks down Euryalos with a single blow (23.660-699). In the scholia to this passage, we find the comment that “this shows, as is right, that they had an art of boxing–it was not just about strength” (schol. B ad Il. 23.665: ἦν δέ, ὡς ἔοικε, καὶ τέχνη παρ’ αὐτοῖς τῆς πυγμῆς, οὐ μόνον ἡ δύναμις).

In the Odyssey, Odysseus returns home in disguise and is forced to box the local beggar Iros to entertain the suitors who are plaguing his home. In this scene, it is again his intelligence that wins the day.

“They led [Iros and Odysseus] into the middle. Both men raised their hands.
Much-enduring, godly Odysseus deliberated then
whether he would pummel him and make the soul depart his fallen opponent
or just strike him enough to lay him out on the ground.
As he deliberated this seemed better to him,
just to strike him so that the Achaians might not figure out who he was.
And then, when their hands were raised, Iros punched his right shoulder,
but Odysseus hit him on the neck under the ear—the bones within
bent. Immediately, dark blood spat from his mouth
And he fell moaning in the dust as he ground his teeth together
and kicked the ground with his feet. Then the arrogant suitors
nearly died with laughter as they raised their hands….” 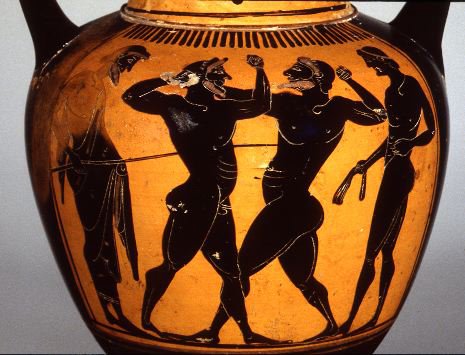 This post is in honor of Paul Holdengraber and his fabulous interviews with the pugilist Mike Tyson.