“Zeno of Citium writes in his Anecdotes that after Kratês unthinkingly sewed a sheepskin to his cloak, he looked absurd and was laughed at when he exercised. He was in the habit of raising his hands and saying “Be bold, Kratês, for your eyes and your body. Someday you will see these men who laughing at you worn out by sickness and envying you, criticizing their own laziness.

He used to say that we should pursue philosophy until generals seemed to be donkey-drivers. He also claimed that those who lived with flatterers were as exposed as calves among wolves—For there is no one to protect these or those, but only those who contrive against them. When he perceived he was dying, he sang to himself, saying “you are going to Hades’ home, dear hunchback”. [For he was a hunchback because of old age.” 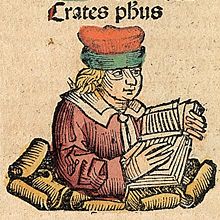 2 thoughts on “Next Time You Feel Self-Conscious at the Gym, Remember This”