Welcome to the semifinal of the #NANAIHB (the Non-Atreid, Non-Achilles Iliadic hero Bracket), the definitive tournament to decide who really is the second best of the Achaeans. The first round saw six contests, most of which were blowouts. The second round was equally lopsided, leaving us with two ‘classic’ matches. Odysseus vs. Ajax and Patroklos vs. Diomedes. Ajax prevailed in the first match. Today Diomedes meets Patroklos

The Achaean assembly was buzzing like a hive in adoration of its queen as Patroklos and Diomedes prepared to face one another. In the seasdie corner, Achilles helped Patroklos put on his armor, talking constantly with encouragement and advice about Diomedes’ tendency to drop his shield arm when parrying to the left. Those near him could hear Achilles tell Patroklos that Diomedes was far superior with his sword and it would be best to finish him quickly.

Aged Nestor and Sthenelos stood next to Diomedes as he watch the preparations. Tydeus’ son had been standing in full armor for over an hour. Many of the Achaeans had arrived at the assembly to find him already there, staring out towards the sea.

As Agamemnon stepped into the center to call the contest’s start, those near Diomedes could hear him praying:

“Hear me, Atrutônê, dear child of Aegis bearing Zeus.
If ever you also stood alongside my father in concern
Amid the violent battle, care for me now in turn, Athena.”

Across from him, Patroklos turned and raised his hands to the sea, intoning:

“Hear me, fine haired Thetis, mother of Achilles,
Hear me, goddess, come as a good helper for my feet.”

As Agamemnon called out, Patrklos hurled his spear first and Diomedes redirected it with his shield only to barely dodge the next spear headed for his right thigh. Patroklos had sent the first spear wide left to draw Diomedes’ spear arm. Tydeus’ son was saved from a quick injury by a gust of wind that left the errant spear to graze the strong belt near his hip.

Diomedes took careful aim and launched one spear after another, missing easily each time as Patroklos sped from side to side, racing towards him. Diomedes leaned down and picked up a stone with one hand so large two men with a cart and a bar could not move it today and he waited. Patroklos was closing on him and when he was two strides away, Diomedes launched the stone in the air, dropped his shield and punched Patroklos square in the chest. As the hero fell back, the stone plummeted, narrowly missed Patroklos’ head, but landing on the end of his left foot, crushing the toes.

Diomedes vaunted, “Patroklos, yield, the fame of your fury will reach your father’s ears.” And the Achaeans laughed because Diomedes’ wordplay had exceeded Agamemnon’s earlier attempts as much as his valor in war surpassed the Atreids’. Patroklos, yelled back “Son of Tydeus, you are certainly strong in war, but you have not beat me yet.” As Patroklos got to his feet, Achilles roared from the sideline, “Be careful Diomedes, you can scar his face, but I don’t want another wound to his legs!” And, as expected, the gathered Achaeans started laughing again.

Patroklos drew his sword and the two began to circle, feinting and parrying. Diomedes kept pressing him to move on his injured foot, and Menoitios’ son stayed light and fast, but his sword work was slower and his shield arm was wearing from the relentless strikes meted out by Tydeus’ son.

The crowd was restless and calling out to Diomedes to finish it. But Patroklos kept fighting. To everyone’s surprise, Patroklos faked slipping on his injured foot and came around to cut deeply into Diomedes’ left arm. Diomedes dropped his shield and stood there, surprised and suddenly still. Patroklos roared in victory and rushed at him. Diomedes stepped aside, parried the charge, and let Patrklos’ speed take him forward. He brought the butt of his sword back around and smashed it into his opponent’s helmet. Patroklos crumpled to the ground.

Achilles yelled, “Stay your sword, violent son of Tydeus. My Patroklos yields.” The Achaeans erupted in cheers as Sthenelos helped Diomedes tend to his wound and Achilles came over to lift Patroklos from the ground. 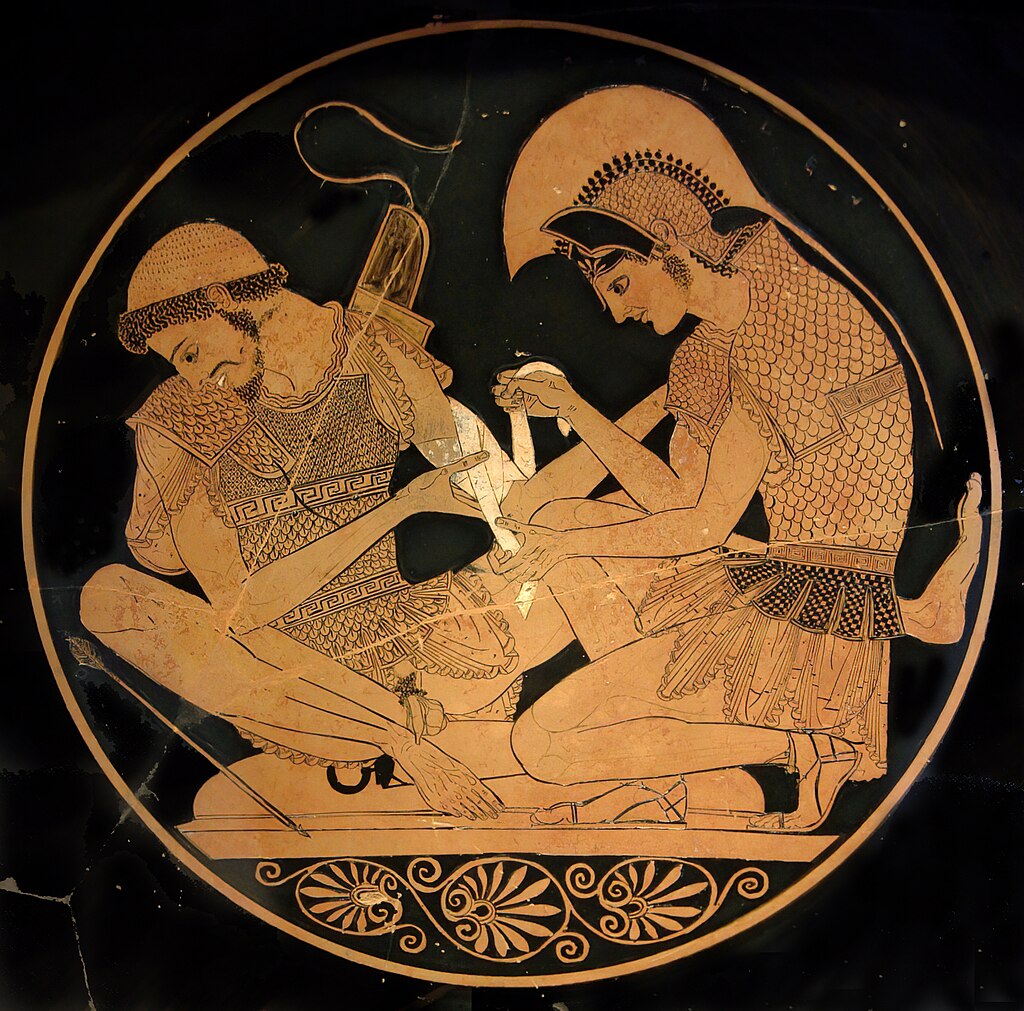 The final round starts tomorrow: Ajax vs. Diomedes for the title of Second best of theAchaeans!