Plutarch, Moralia 644e: Table-Talk, On the Usefulness of Drinking for Getting to Know People

“When the Poet Simonides, my Sossios Senecios, saw a stranger at a drinking party sitting there in silence and talking to no one he said “Man, if you are a fool, you are doing something wise; but if you are wise, you are doing a foolish thing.” For, as Heraclitus says, “it is better to hide ignorance” and it is really hard to do this while drinking “which makes even a very wise man sing / and causes him to laugh gently and dance /and then to speak whatever word which was unsaid” [Hom. Od. 14.464-6).

In this, it seems to me, the poet demonstrates the differences between being a little tipsy and drunkenness. For song, merriment, dancing and dancing are coming to those who have drunk moderately. But talking too much and saying what is better kept silent is the work of too much wine, of being drunk. For this reason also, Plato believes that we can see the character of most men while drinking, as Homer said, “those two did not learn one another’s nature even at the table”.

It is clear that Homer knows the talkativeness of wine and how it creates much conversation. For it is not possible to know people who sit eating and drinking in silence. Drinking leads to chatting, and by chatting someone emerges and much that is otherwise hidden is disclosed—drinking together provides some way of getting to know each other.

For this reason, it is not wrong to chastise Aesop, “Why are you searching out these gateways, sir, through which different people can gaze upon the mindset of one another? This lays waste our well made modes of behavior, from the most basic custom by which we were trained, as if by a teacher.” This is why drinking is useful to both Aesop and Plato, and for anyone else looking for a method of inquiry. 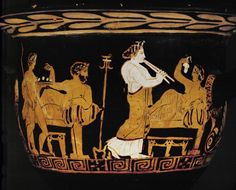 One thought on “Want to Make Friends at Holiday Parties? Plutarch on Why Drinking is Useful”