“The story goes that Medeia learned all the powers of drugs from her mother and her aunt but that she chose to use them in the opposite way. For she used to rescue those who were sailing from foreign countries from dangers and then she would ask her father by begging or appealing for the safety of those who were about to die. At times she would release her from prison herself and secure some safety for those who suffered misfortune. This is because Aietes, thanks to his own cruelty or because of the persuasion of his wife Hekate, had accepted a practice of murdering foreigners. While Medeia continued more and more to oppose her parents’ choice, people say that Aetes, because he suspected a conspiracy from his daughter, remanded her to something like house arrest [lit. “free imprisonment”]. Medeia, still, evaded this and fled to a certain precinct of Helios near the sea. This was at the time when the Argonauts were carried from the Taurian Chersonese and sailed during the night to the part of Kolkhis just mentioned where they happened to find Medeia wandering along the beach and learned from her the practice of foreigner-killing….” 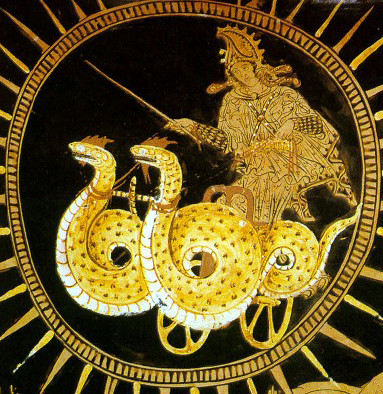