“Gesner was one of the foremost leaders of the movement known as the New Humanism. The Old Humanism had aimed at the verbal imitation of the style of the Latin Classics, and at the artificial prolongation of the modern life of the ancient Latin literature. This aim was gradually found to be impracticable, and, about 1650, it was abandoned. Latin was still taught in schools ; it also survived as the medium of university instruction and as the language of the learned world. But the ancient literature came to be considered as a superfluity; neglected at school, it was regarded simply as a waste and barren field, where the learned might burrow in quest of the facts required for building up the fabric of an encyclopaedic erudition. Such was practically the view of the School of Halle.” 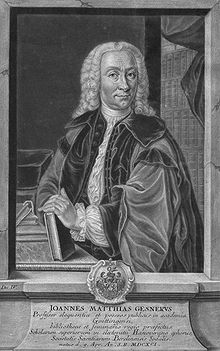