“Aldus was far more than a printer and bookseller; he rejoiced in rescuing the writings of the ancients from the hands of selfish bibliomaniacs, many of his texts were edited by himself, and he was honoured as a scholar by the foremost scholars of the age. One of the most generous of men, his generosity was appreciated by Erasmus, and by his own countrymen. The editor of the Prefaces to the Ediiiones Principes justly describes ‘the dedications of Aldus as worth all the rest; there is a high and a noble feeling, a self-respect, and simplicity of language about him which is delightful; he certainly had aspiring hopes of doing the world good’. He is probably the only publisher who, in the preface of a work published by himself, ever used such language as the following : — nihil unquam memini me legere deterius, lectuque minus dignum [I don’t recall ever reading anything worse or less worth reading in all my life.]. Such are the terms in which he refers to the Life of Apollonius by Philostratus; but he hastens to add that, as an antidote to the poison, he publishes in the same volume the refutation by Eusebius, translated by the friend to whom he dedicates the work. In the twenty-one years between 1494 and 1515, Aldus produced no less than twenty-seven editiones principes of Greek authors and of Greek works of reference. By the date of his death in 1515, all the principal Greek Classics had been printed. Before 1525 the study of Greek had begun to decline in Italy, but meanwhile an interest in that language had happily been transmitted to the lands beyond the Alps.” 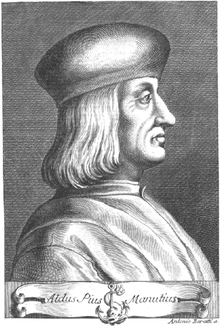