So, a twitter correspondent (.@stustin) asked me about this one: 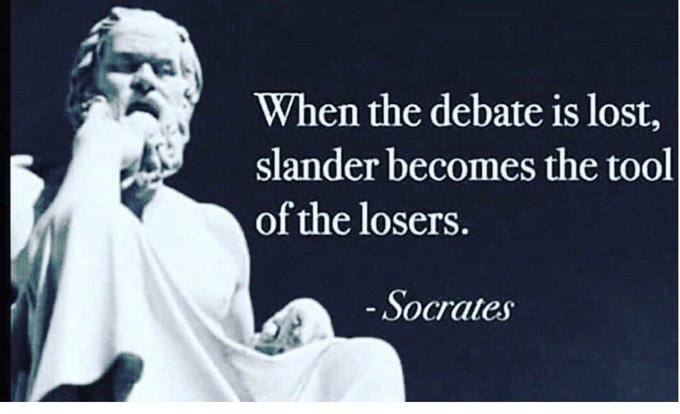 This is so fake that it has been debunked by Snopes and Politifact, which traced the simplistic sentiment to a goodreads account in 2008. A simple google books search shows that the misattribution made the leap to books a few years ago and seems to be growing like a virus or cancer.

On my fake quotation scale, this stands somewhere between Peisistratos Fake–because it has been obviously manufactured–and Racist Fake because it is used in political debates by those trying to prevaricate when their interlocutors mention the moral turpitude of someone like a Supreme Court Justice who likes beer and putting his genitals in people’s faces. This is just another one of those lame, nitpicking logic-memes which put on a false mantle of antiquity for authority.

Socrates does talk a lot about slander, but he is usually worried about how slander prejudices audiences against speakers before a debate even happens (he says this in the Apology). In this case, the concern is the opposite of that in the spurious quotation: the quotation fears that debate devolves into name-calling and away from fact whereas Socrates is actually worried that previous name-calling and unquestioned assumptions makes it impossible for his audiences to apprehend the facts of a case.

“Well, so be it. I need to defend myself, Athenians, and I need to try to take from you the slander you have absorbed over so long a period in such little time.”

“The knife cuts, but slander separates friends: a saying of Democritus”

“I think that I am wiser by this very small bit: I don’t pretend to know what I don’t know.”

One thought on “Slandering this Fake Socrates Quote is Perfectly Fine”