“In the age succeeding the expulsion of the Peisistratidae, Pindar, with a conscious reference to the origin of the word Rhapsodos, describes the Rhapsodes as ‘the sons of Homer, singers of deftly woven lays’. He also alludes to the laurel-branch that they bore as an emblem of poetic tradition. Homer himself (he tells us) had ‘rightly set forth all the prowess of Ajax, leaving it as a theme for other bards to sing, by the laurel-wand of his lays divine. Pindar’s praise of Amphiaraus is a clear reminiscence of a Homeric line in praise of Agamemnon. He describes the ‘fire-breathing Chimaera’ in a phrase like that of Homer, but differs from him in minor details as to Bellerophon, Ganymede and Tantalus. He shows a similar freedom in giving a new meaning to a phrase borrowed from his own countryman the Boeotian poet, Hesiod, by applying to the athlete’s toilsome training a proverbial admonition originally referring to the work of the farm. In the age of Pindar, and in the Athenian age in general, the poet and his audience were alike saturated with the study of the old poets. Homer and Hesiod, and a touch alone was wanted to awaken the memory of some long familiar line.” 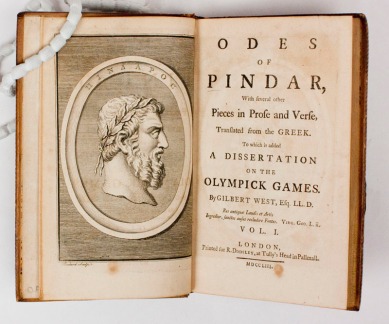