Letter from A Symposium on the Value of Humanistic, Particularly Classical, Studies as a Training for Men of Affairs:

“It would be a waste of your time and of my energy, were I to try to plead the cause of the Classics. America does not stand alone in its decreasing attention to Greek and Latin. Schoolmasters and university professors in England, France, and Germany make the same complaint. We must not close our eyes to the fact that the prevalent methods of teaching classical literature are largely to blame for this decrease. The dry, pedantic insistence on grammatical and syntactical detail, so usual in High School and University, has driven many a student out of the fold. It is asking too much of even a well-disciplined lad to read the Prometheus or the Antigone in this spirit. His eyes must be opened to the human values and to the aesthetic charm of -ancient literature ; and for this the teacher is often too incapable or too unwilling. I am confident that the younger generation of teachers, who are now coming into their own, and who have ‘tasted the dragon’s blood’ in Greece or in Italy, will inject new life into their subject, or rather, that they will understand how to show forth to their hearers that eternal life and beauty of the Classics which is so often buried under mountains of dry philology.

In an age like ours, where ambitious youth no longer treads the cloistered walk, where ‘Make Money,’ ‘Win Success,’ ‘Out-do Croesus’ are written in large letters on the blackboard of School, College, and University, usurping the place of the γνῶθι σαυτόν, how can we expect people to find value in Homer or Euripides, in Caesar or Catullus?

$uccess, written with the dollar sign, instead of with the commoner, but more harmless sibilant, is the shibboleth of our day. In his last year’s Phi Beta Kappa oration President Woodrow Wilson, of Princeton, said:

Is it not time we stopped asking indulgence for learning and proclaimed its sovereignty? Is it not time that we reminded the College men of this country that they have no right to any distinctive place in any community unless they can show it by intellectual achievement? that if a University is a place for distinction at all, it must be distinguished by conquest of mind?

Splendid! But what does the average undergraduate think of such words as these? ‘Stuff and nonsense; very pretty in theory, but how do they apply to my case to me, who want to make a Success of my life?’ We have made the path of education too smooth; our young men and women rush over it on the soft cushions of hurrying automobiles. They are no longer forced to face that healthy struggle for knowledge that wearies the body, but refreshes the mind. Why, there are Colleges and Universities in our land where ‘original research’ is recommended to young people as a profitable pastime before they know what a bibliography looks like! Most things can be popularized; original research cannot.” 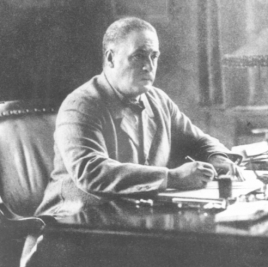 One thought on “Buried Under Mountains of Philology”