“If some louts in the Modern Fourth dared to push them from side to side, as they went by, Michael and Alan would begin to fight and would shout, ‘You stinking Modern beasts! Classics to the rescue!’ To their rescue would pour the heroes of the Upper Fourth A. Down went the Modern textbooks of Chemistry and Physics, and ignominiously were they hacked along the corridor. Doubled up by a swinging blow from a bag stood the leader of the Moderns, grunting and gasping in his windless agony. Back to the serenity of Virgilian airs went the Upper Fourth A, with Michael and Alan arm in arm amid their escort, and most dejectedly did the Modern cads gather up their scientific textbooks; but during the ‘quarter’ great was the battle waged on the ‘gravel’–that haunt of thumb-biting, acrimonious and uneasy factions. Michael and Alan were not yet troubled with the fevers of adolescence. They were cool and clear and joyous as the mountain torrent: for them life was a crystal of laughter, many-faceted to adventure.” 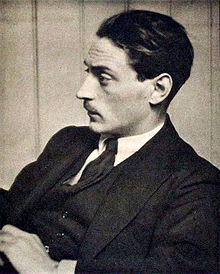