He was a man of extreme lust: he used to refer to his endless intercourse as “bed-wrestling”, as if it were a type of exercise. There was a rumor that he used to depilate his concubines himself and that he used to go swimming with street prostitutes. Even though he repeatedly refused a wedding to his brother’s daughter who was offered to him for marriage when she was still a virgin because he was overcome with the Domitia affair, he seduced her not long after she was married to someone else and while Titus was still alive. But, soon, he loved her openly and with the utmost passion once she was deprived of father and husband, to the point that he was the reason for her death when she was forced to abort a child conceived with him.” 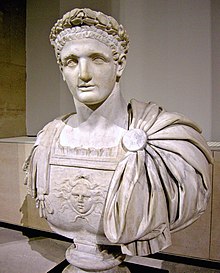