The consummate artistry of the Homeric poems, and their relevance to contemporary life, are perfectly illustrated in the following lines from the Iliad (22.153-156):

“There, right next to the springs, there were broad and beautiful washing-basins made of stone, where the beautiful wives and daughters of the Trojans used to wash dirty clothes, back in the time of peace before the sons of the Achaians came.”

Homer does not rely on cheap and easy effects to develop deep, gut-wrenching pathos. The simplicity of the scene from daily life reminds the listener/reader of exactly what the Trojan women were no longer able to do after the commencement of the war – a troublesome daily chore, to be sure, but one which comes to represent a happier time.

But it is the last line quoted which evokes so much without stating it explicitly. The informed reader, armed with the knowledge of the war’s outcome, knows that these washing basins will never be used again, and so the phrase ‘before the sons of the Achaians came’ calls to mind not just a minor inconvenience in the Trojan women’s lives; it reminds us that the lives of these women are already, effectively, over. Moreover, the use of the phrase ‘previously, at a time of peace,’ (which is balanced so clearly in the Greek against the word ‘before’ with ‘to prin…prin’) underscores the fact that after the sons of the Achaeans arrive, the Trojans never know peace again – their entire city is destroyed, and most of the citizens wiped from the face of the planet.

The destruction of an entire polity is horrific, whether it result from ten years of brawling or from ten minutes of bombing. It is easy to blame the Trojan War on Helen, or Paris, or Aphrodite, but the real causes were folly and intransigence; these are immortal, and in no shorter supply than they were three thousand years ago. This passage brings tears to my eyes every time I read it and remember that, though they did not yet know it, the ‘time of peace’ was forever lost to the Trojans – never again would they visit the washing basins; rape, death, and slavery were all that remained. I sincerely hope that we do not find ourselves in the same position of longing for our own ‘time of peace, before the sons of the Achaians came.’ 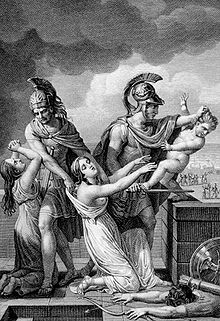