“My father, John Percival Postgate, for over a generation Lecturer at Trinity College, Cambridge, and then Professor of Latin at Liverpool, editor of the Corpus Poetarum Latinorum and of Tibullus and others of the (to my mind) least interesting of the Roman poets, was a crusader like his father before him, but a crusader in the linguistic field. He was the great protagonist of the modern pronunciation of Latin and of the teaching of Latin by ‘the direct method,’ i.e., by making the children talk Latin as though it were any modern language. (He also wrote a grammar, Postgate’s Latin Grammar, which was intended to supersede Kennedy’s grammar in the public schools. It never did that, but it had sufficient success to earn me some vicarious unpopularity among those who had suffered from it at school.)” 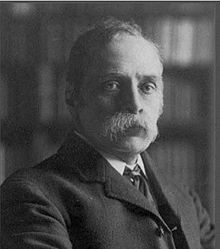