Alexander Pope, Preface to the Iliad of Homer:

“If we descend from hence to the expression, we see the bright imagination of Homer shining out in the most enlivened forms of it. We acknowledge him the father of poetical diction; the first who taught that “language of the gods” to men. His expression is like the colouring of some great masters, which discovers itself to be laid on boldly, and executed with rapidity. It is, indeed, the strongest and most glowing imaginable, and touched with the greatest spirit. Aristotle had reason to say, he was the only poet who had found out “living words;” there are in him more daring figures and metaphors than in any good author whatever. An arrow is “impatient” to be on the wing, a weapon “thirsts” to drink the blood of an enemy, and the like, yet his expression is never too big for the sense, but justly great in proportion to it. It is the sentiment that swells and fills out the diction, which rises with it, and forms itself about it, for in the same degree that a thought is warmer, an expression will be brighter, as that is more strong, this will become more perspicuous; like glass in the furnace, which grows to a greater magnitude, and refines to a greater clearness, only as the breath within is more powerful, and the heat more intense.” 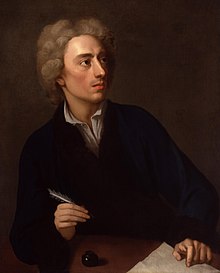