“At that time, the Egyptians held a tyranny and slaughtered their leaders. Diocletian marched against them, and waged war in Alexandria. He besieged them and dug a trench around the city. He then cut off the aqueduct and diverted it away from Canopus, as it had been of some use to the city. When he took Alexandria, he set it ablaze. He came into it mounted on his horse, which trotted about on the corpses. He ordered one of his officers not to desist from slaughter until the blood of the slain reached the knee of the horse upon which he sat. It happened, in accordance with this order, that as he approached close to the gate, the horse upon which he was riding tripped over the corpse of a man, and collapsing* upon it had its knee covered in blood. This gave a pretense for indulgence, and the soldiers ceased killing the citizens of Alexandria. The Alexandrians erected a bronze statue to the horse out of gratitude. Up to this day, this spot is called the ‘Horse of Diocletian.'”

*For κονδάψαντα; I have no idea what this word means, and found nothing in a quick lexicon search. I felt better about this ignorance after reading Bentley’s note: ‘novum plane mihique inauditum hoc vocabulum.’ (‘This word is obviously new, and I have never heard it.’) 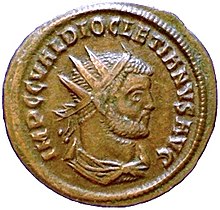