Edward Gibbon, Memoirs of My Life and Writings

“From the references in that unequal collection, and from an useful treatise, the Ductor Historicus of Hearne, I obtained some knowledge of the Greek and Latin Historians. As many as were accessible to an English student I endeavoured to procure, and all were devoured in their turns — from Littlebury’s lame Herodotus, and Spelman’s valuable Xenophon, to the pompous folios of Gordon’s Tacitus, and a ragged Procopius of the beginning of the last Century. The cheap attainment of so much learning confirmed my dislike to the study of language, and I represented to my aunt that, were I master of Latin and Greek, I must interpret to myself in English thethoughts of the original, and that such hasty extemporary versions would be probably inferior to the elaborate translations of professed scholars : a feeble sophism, but which could not be easily refuted by a person ignorant of any language but her own. My literary wants began to multiply ; the circulating libraries of London and Bath were exhausted l)y my importunate demands, and my expenses in books surpassed the measure of my scanty allowance. “ 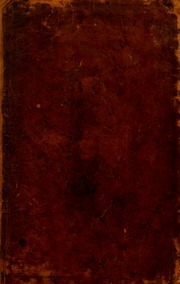