This is a continuation of the Christmas Story in the apocryphal Gospel of James [also sometimes called the “Infancy” Gospel” or the Protoevangelium of James].

22. “And, look, Joseph was prepared to leave to Judea and there was trouble in Bethlehem. For the Magi had come from the East in Persia, saying, “Where is the child born King of the Jews? For we saw his star in the East and we have come to bow before him. When Herod heard this, he was upset and he sent attendants to the Magi and he also summoned the high priests and asked them, “Where has this “Christ” been born?” and they answered, “In Bethlehem of Judea—for it was written thus.” And he let them go. Then he questioned the Magi, saying to them, “What sign did you see for a king who was born?” And the magi said to him, we say the greatest start blazing among the these stars and making them seem dull. We knew from this that a king had been born for Israel. For this reason we came to bow before him.” And Herod responded, “Go and seek out the child carefully. And when he is found, send me news of it so that I can go and bow to him too.

And so the Magi left and, look, the star which they saw in the east led them on until they came to that place where the cave protected the child’s head. And when they saw him with his mother Mary, they bowed and took from their strongboxes the gifts they brought: gold, frankincense and myrrh. Because they had been warned by a sacred angel not to enter Judea near Herod, they took another route to return to their country.

22 But once Herod figured out that he had been evaded by the Magi, he was enraged and he sent assassins whom he ordered to kill all infants under two years. Once Mary heard that the infants were being killed, she took her child in fear and left to Egypt with Joseph, just as was predicated to them. But when Elisabeth took John and went into the hills and looked around for a place to hide him, there was no safe sanctuary. Then, she said as she cried, “Mountain, mountain—take a mother with her child. For she was not able to leave. And then suddenly, the mountain split into two and welcomed her. The mountain itself was alight for them and there was an angel of the lord looking over them.” 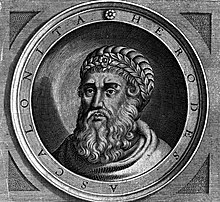 One thought on “The Magi, Herod, and A Flight to Egypt”