That Demosthenes, while still a young man and a disciple of the philosopher Plato, once heard Callistratus the orator in an address to the people, abandoned Plato, and began to follow Callistratus.

Hermippus wrote that when Demosthenes was still a young man he came regularly to the Academy and was in the habit of listening to Plato. He says, ‘And that Demosthenes, leaving his house as was his habit, was on his way to Plato when he saw many people gathering together. He asked what the reason for that was, and he realized that they were rushing to hear Callistratus. That Callistratus was an orator in the city of Athens, and they call such speakers demagogues there. It seemed like a good idea to take a little break from his route and see whether listening to Callistratus was worth all of the eagerness of the people hastening to him. He came and heard him speaking in the Case Concerning Oropos, and was so moved, despoiled, and captivated, that he began to follow Callistratus from that time, and abandoned the Academy and Plato along with it.’ 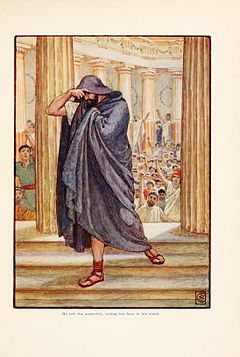