“Gallienus was, moreover, exceedingly clever, and I would do well to add a few examples of his sharp wit here. Once, when he had a huge bull sent into the amphitheater and the gladiator who was sent to kill him proved unable to kill the bull even after being brought out ten times, Gallienus sent the man a crown. When everyone began to murmur and wonder what the world was coming to for a totally incompetent person to be crowned, Gallienus ordered a herald to announce, ‘It is a difficult thing not to wound a bull so many times.’

Similarly, when a certain merchant had sold glass gems as real to his wife, and she (after discovering the trick) wanted him to be punished, Gallienus ordered that the merchant be seized and thrown to the lions. Then, a chicken was sent up from the amphitheater’s holding cage. When everyone was marveling at such an absurd sight, Gallienus ordered the herald to declare, ‘He has committed an imposture, and suffered one in turn.'” 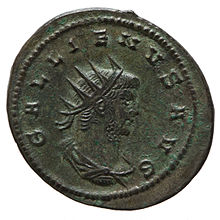