Proca, the king of the Albans, had two sons, Amulius and Numitor. He left his kingdom to them to be held in annual succession (such that they would rule in alternate years). But Amulius did not hand over the throne to his brother and, in order to deprive him of a successor, he made Numitor’s daughter Rhea Silvia a priestess of Vesta, so that she would be maintained in a state of perpetual virginity. After she was violated by Mars, she gave birth to Remus and Romulus.

Amulius threw her into chains, and dismissed the infants to the Tiber, where the water left them on the dry bank. A she-wolf came to their cry and nursed them herself. Soon, the pastor Faustulus took them and gave them to his wife Acca Larentia to be raised. These youths, once Amulius had been killed, restored the throne to their grandfather Numitor. They themselves founded a city for the united pastors, which Romulus, victorious in the matter of augury because he had seen twelve vultures when Remus saw six, called Rome. And in order to fortify it with laws before he fortified it with walls, he decreed that no one jump over the wall. Remus mockingly jumped over the wall and was killed by the centurion Celer with a hoe. 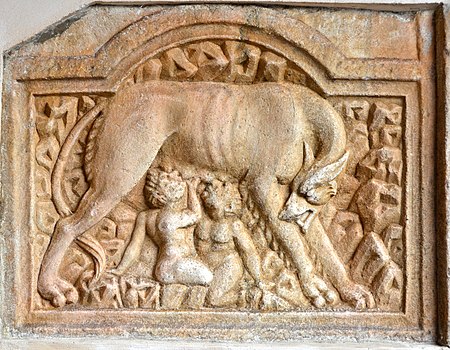