The ceremonious physician returned immediately and sat down by me, asking a thousand pardons for leaving me alone: and giving me to understand that what he had communicated to Mr. Medlar at the bar, was an affair of the last importance, that would admit of no delay. He then called for some coffee, and launched out into the virtues of that berry, which, he said, in cold phlegmatic constitutions, like his, dried up the superfluous moisture, and braced the relaxed nerves. He told me it was utterly unknown to the ancients; and derived its name from an Arabian word, which I might easily perceive by the sound and termination. From this topic he transferred his disquisitions to the verb drink, which he affirmed was improperly applied to the taking of coffee, inasmuch as people did not drink, but sip or sipple that liquor; that the genuine meaning of drinking is to quench one’s thirst, or commit a debauch by swallowing wine; that the Latin word, which conveyed the same idea, was bibere or potare, and that of the Greeks pinein or poteein, though he was apt to believe they were differently used on different occasions: for example—to drink a vast quantity, or, as the vulgar express it, to drink an ocean of liquor, was in Latin potare, and in Greek poteein; and, on the other hand, to use it moderately, was bibere and pinein;—that this was only a conjecture of his, which, however, seemed to be supported by the word bibulous, which is particularly applied to the pores of the skin, and can only drink a very small quantity of the circumambient moisture, by reason of the smallness of their diameters;—whereas, from the verb poteein is derived the substantive potamos, which signifies a river, or vast quantity of liquor. I could not help smiling at this learned and important investigation; and, to recommend myself the more to my new acquaintance, whose disposition I was by this time well informed of, I observed that, what he alleged, did not, to the best of my remembrance, appear in the writings of the ancients; for Horace uses the words poto and bibo indifferently for the same purpose, as in the twentieth Ode of his first Book.

That I had never heard of the verb poteein, but that potamos, potema, and potos, were derived from pino, poso, pepoka, in consequence of which, the Greek poets never use any other word for festal drinking. Homer describes Nestor at his cups in these words,

And Anacreon mentions it on the same occasion always in every page.

And in a thousand other places. The doctor who doubtless intended by his criticism to give me a high idea of his erudition, was infinitely surprised to find himself schooled by one of my appearance; and after a considerable pause cried, “Upon my word, you are in the right, sir—I find I have not considered this affair with my usual accuracy.” Then, accosting me in Latin, which he spoke very well, the conversation was maintained full two hours, on a variety of subjects, in that language; and indeed he spoke so judiciously, that I was convinced, notwithstanding his whimsical appearance and attention to trifles, that he was a man of extensive knowledge, especially in books; he looked upon me, as I afterwards understood from Mr. Medlar, as a prodigy in learning, and proposed that very night, if I were not engaged, to introduce me to several young gentlemen of fortune and fashion, with whom I had an appointment at the Bedford coffee house. 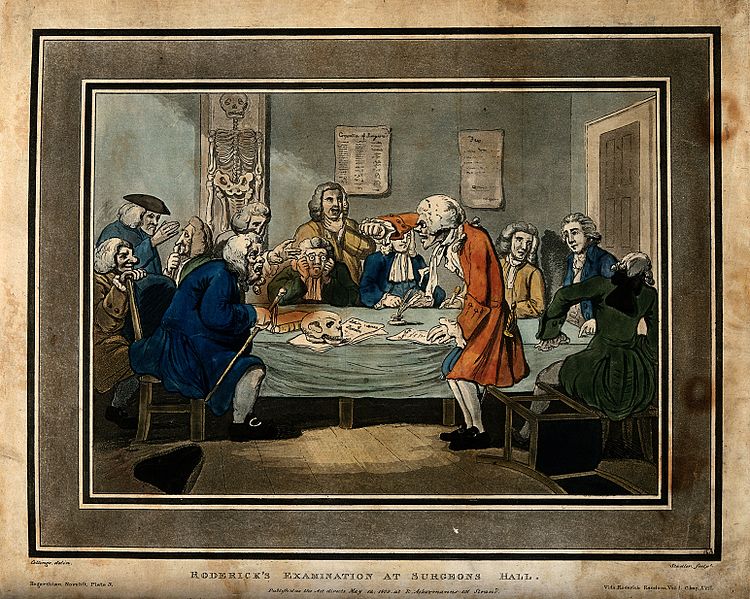