“I will turn now to refuting the remaining authors who have written against us. I really don’t know if it is worth my time to respond seriously to the attacks of Apion the grammarian. Some of what he has written is similar to what other people claim; things which he added are rather weak, and most of it is complete absurdity which, to speak truthfully, exposes the author for a scoundrel and a fraud right to the end of his life.

But since many people tend because of ignorance to be attracted by these kinds of arguments rather than those of a serious nature and they take pleasure in slander while finding praise annoying, I believe I am compelled to not to leave this person unexamined since he has composed an indictment of us direct enough for a courtroom.

This is because I have also noticed that people are especially pleased when someone who started to slander others first is refuted through his own vices. Now, Apion’s argument is not easy to sum up or to understand clearly what he wants to say. But—as far as is pack of disordered lies can be analyzed—some of his words are like those already examined, related to how our people departed from Egypt; another category is the accusation against the Jewish residents of Alexandria; and the third is mixed up among those with claims against our temple rites and general practices.” 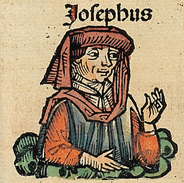