“When the city was taken by storm and the Romans were grabbing and taking measureless wealth from it, Camillus looked from the citadel at what was happening, and at first stood there crying, and then when congratulated by someone present he raised his hands to the gods and prayed, ‘O greatest Zeus and you gods, judges of good and evil deeds, you know well that we have set upon this city of enemies and lawless men not in contravention of justice, but because of necessity. And if,’ he said, ‘some retribution is owed to us for our present prosperity, I pray that it be visited upon me (with the smallest amount of harm) in place of the city and the army of the Romans.’ Saying this, as it is customary for the Romans in prayer or adoration of the gods to spin to the right, he tripped as he was turning. Everyone present was greatly disturbed, but Camillus, picking himself back up from the fall, said that a minor misfortune had befallen him in exchange for the greatest fortune, just as he had prayed.” 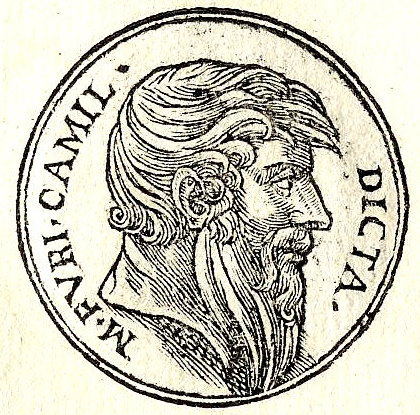