Edward Gibbon, The Decline and Fall of the Roman Empire (Chp. XV):

“When Christianity appeared in the world, even these faint and imperfect impressions had lost much of their original power. Human reason, which by its unassisted strength is incapable of perceiving the mysteries of faith, had already obtained an easy triumph over the folly of Paganism; and when Tertullian or Lactantius employ their labors in exposing its falsehood and extravagance, they are obliged to transcribe the eloquence of Cicero or the wit of Lucian. The contagion of these sceptical writings had been diffused far beyond the number of their readers. The fashion of incredulity was communicated from the philosopher to the man of pleasure or business, from the noble to the plebeian, and from the master to the menial slave who waited at his table, and who eagerly listened to the freedom of his conversation. On public occasions the philosophic part of mankind affected to treat with respect and decency the religious institutions of their country; but their secret contempt penetrated through the thin and awkward disguise; and even the people, when they discovered that their deities were rejected and derided by those whose rank or understanding they were accustomed to reverence, were filled with doubts and apprehensions concerning the truth of those doctrines, to which they had yielded the most implicit belief.

The decline of ancient prejudice exposed a very numerous portion of human kind to the danger of a painful and comfortless situation. A state of scepticism and suspense may amuse a few inquisitive minds. But the practice of superstition is so congenial to the multitude, that if they are forcibly awakened, they still regret the loss of their pleasing vision. Their love of the marvellous and supernatural, their curiosity with regard to future events, and their strong propensity to extend their hopes and fears beyond the limits of the visible world, were the principal causes which favored the establishment of Polytheism. So urgent on the vulgar is the necessity of believing, that the fall of any system of mythology will most probably be succeeded by the introduction of some other mode of superstition. Some deities of a more recent and fashionable cast might soon have occupied the deserted temples of Jupiter and Apollo, if, in the decisive moment, the wisdom of Providence had not interposed a genuine revelation, fitted to inspire the most rational esteem and conviction, whilst, at the same time, it was adorned with all that could attract the curiosity, the wonder, and the veneration of the people. In their actual disposition, as many were almost disengaged from their artificial prejudices, but equally susceptible and desirous of a devout attachment; an object much less deserving would have been sufficient to fill the vacant place in their hearts, and to gratify the uncertain eagerness of their passions. Those who are inclined to pursue this reflection, instead of viewing with astonishment the rapid progress of Christianity, will perhaps be surprised that its success was not still more rapid and still more universal. It has been observed, with truth as well as propriety, that the conquests of Rome prepared and facilitated those of Christianity.” 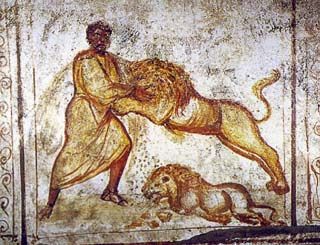 One thought on “Paganism Is Out!”