“The minor expressions by the Greeks in word, in symbol, and in religious service, of this faith, are so many and so beautiful, that I hope some day to gather at least a few of them into a separate body of evidence respecting the power of Athena, and of its relations to the ethical conception of the Homeric poems, or, rather, to their ethical nature; for they are not conceived didactically, but are didactic in their essence, as all good art is. There is an increasing insensibility to this character, and even an open denial of it, among us now which is one of the most curious errors of modernism,—the peculiar and judicial blindness of an age which, having long practised art and poetry for the sake of pleasure only, has become incapable of reading their language when they were both didactic; and also, having been itself accustomed to a professedly didactic teaching, which yet, for private interests, studiously avoids collision with every prevalent vice of its day (and especially with avarice), has become equally dead to the intensely ethical conceptions of a race which habitually divided all men into two broad classes of worthy or worthless,—good, and good for nothing.

And even the celebrated passage of Horace about the Iliad is now misread or disbelieved, as if it were impossible that the Iliad could be instructive because it is not like a sermon. Horace does not say that it is like a sermon, and would have been still less likely to say so if he ever had had the advantage of hearing a sermon. ‘I have been reading that story of Troy again” (thus he writes to a noble youth of Rome whom he cared for), “quietly at Præneste, while you have been busy at Rome; and truly I think that what is base and what is noble, and what useful and useless, may be better learned from that, than from all Chrysippus’ and Crantor’s talk put together.’ Which is profoundly true, not of the Iliad only, but of all other great art whatsoever; for all pieces of such art are didactic in the purest way, indirectly and occultly, so that, first, you shall only be bettered by them if you are already hard at work in bettering yourself; and when you are bettered by them, it shall be partly with a general acceptance of their influence, so constant and subtile that you shall be no more conscious of it than of the healthy digestion of food; and partly by a gift of unexpected truth, which you shall only find by slow mining for it,—which is withheld on purpose, and close-locked, that you may not get it till you have forged the key of it in a furnace of your own heating.

And this withholding of their meaning is continual, and confessed, in the great poets. Thus Pindar says of himself: ‘There is many an arrow in my quiver, full of speech to the wise, but, for the many, they need interpreters.’ And neither Pindar, nor Æschylus, nor Hesiod, nor Homer, nor any of the greater poets or teachers of any nation or time, ever spoke but with intentional reservation; nay, beyond this, there is often a meaning which they themselves cannot interpret,—which it may be for ages long after them to interpret ,—in what they said, so far as it recorded true imaginative vision. For all the greatest myths have been seen by the men who tell them, involuntarily and passively,—seen by them with as great distinctness (and in some respects, though not in all, under conditions as far beyond the control of their will) as a dream sent to any of us by night when we dream clearest; and it is this veracity of vision that could not be refused, and of moral that could not be foreseen, which in modern historical inquiry has been left wholly out of account; being indeed the thing which no merely historical investigator can understand, or even believe; for it belongs exclusively to the creative or artistic group of men, and can only be interpreted by those of their race, who themselves in some measure also see visions and dream dreams.” 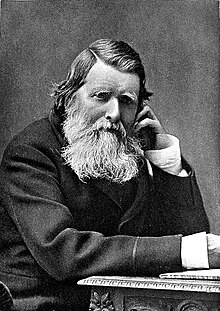 One thought on “Misreading the Ancients”