“Can something good be bad for anyone, or is it possible for someone not to be good in the abundance of goods? But indeed, we see that all of those things we mentioned are of such a sort that the wicked have them, but the good do not. For that reason, anyone at all may laugh at me if they wish, but true reasoning will possess more power with me than the opinion of the common mob. Nor will I ever say that someone has lost their goods if they should lose their cattle or furniture. I will always praise the wise man Bias who, as I think, is numbered among the seven sages. When the enemy had seized his fatherland of Priene, and the other citizens were fleeing while carrying many of their possessions with them, Bias was advised by another to do them same himself. Bias responded, ‘I am doing just that – I carry everything I own with me.'” 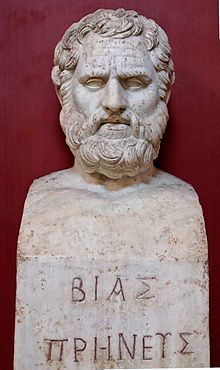