“Κάθαμμα λύειν, that is, to loose the knot is said of one who easily completes a task which has been held up in some way. They say that the saying was born from the fact that Midas is said to have been accustomed to be carried by a chariot joined together by some unbreakable knots made out of the core of horn. After this was placed in a temple, there sprang up among the Phrygians a rumor that the one who had loosed this bond would gain power over Asia. Alexander the great undid the bond by removing the pin which held the yoke to the pole; some say that he cut it with his sword. We will mention this story again elsewhere in the story of the ‘Herculean Knot’. Cicero wrote in his fifth book of letters to Atticus, ‘Let there be no honor given to Caesar by the senate, until this knot is loosed’, that is until this business is completed.” 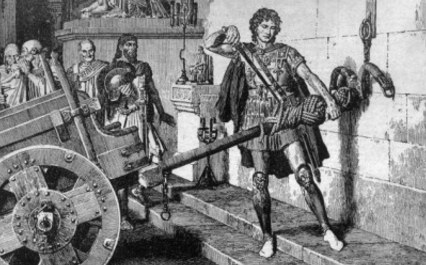