Robert Burton, The Anatomy of Melancholy:

“A second cause is ignorance, and from thence contempt, successit odium in literas ab ignorantia vulgi; which Junius well perceived: this hatred and contempt of learning proceeds out of ignorance; as they are themselves barbarous, idiots, dull, illiterate, and proud, so they esteem of others. Sint Mecaenates, non deerunt Flacce Marones: Let there be bountiful patrons, and there will be painful scholars in all sciences. But when they contemn learning, and think themselves sufficiently qualified, if they can write and read, scramble at a piece of evidence, or have so much Latin as that emperor had, qui nescit dissimulare, nescit vivere, they are unfit to do their country service, to perform or undertake any action or employment, which may tend to the good of a commonwealth, except it be to fight, or to do country justice, with common sense, which every yeoman can likewise do. And so they bring up their children, rude as they are themselves, unqualified, untaught, uncivil most part. Quis e nostra juventute legitime instituitur literis? Quis oratores aut Philosophos tangit? quis historiam legit, illam rerum agendarum quasi animam? praecipitant parentes vota sua, &c. ’twas Lipsius’ complaint to his illiterate countrymen, it may be ours. Now shall these men judge of a scholar’s worth, that have no worth, that know not what belongs to a student’s labours, that cannot distinguish between a true scholar and a drone? or him that by reason of a voluble tongue, a strong voice, a pleasing tone, and some trivially polyanthean helps, steals and gleans a few notes from other men’s harvests, and so makes a fairer show, than he that is truly learned indeed: that thinks it no more to preach, than to speak, or to run away with an empty cart; as a grave man said: and thereupon vilify us, and our pains; scorn us, and all learning. Because they are rich, and have other means to live, they think it concerns them not to know, or to trouble themselves with it; a fitter task for younger brothers, or poor men’s sons, to be pen and inkhorn men, pedantical slaves, and no whit beseeming the calling of a gentleman, as Frenchmen and Germans commonly do, neglect therefore all human learning, what have they to do with it? Let mariners learn astronomy; merchants, factors study arithmetic; surveyors get them geometry; spectacle-makers optics; land-leapers geography; town-clerks rhetoric, what should he do with a spade, that hath no ground to dig; or they with learning, that have no use of it? thus they reason, and are not ashamed to let mariners, apprentices, and the basest servants, be better qualified than themselves. In former times, kings, princes, and emperors, were the only scholars, excellent in all faculties. Julius Caesar mended the year, and writ his own Commentaries,

[“Who always, in the middle of battles, made time for the motions of the stars and sky, and other matters divine.”]

Antonius, Adrian, Nero, Seve. Jul. &c. Michael the emperor, and Isacius, were so much given to their studies, that no base fellow would take so much pains: Orion, Perseus, Alphonsus, Ptolomeus, famous astronomers; Sabor, Mithridates, Lysimachus, admired physicians: Plato’s kings all: Evax, that Arabian prince, a most expert jeweller, and an exquisite philosopher; the kings of Egypt were priests of old, chosen and from thence,—Idem rex hominum, Phoebique sacerdos: but those heroical times are past; the Muses are now banished in this bastard age, ad sordida tuguriola, to meaner persons, and confined alone almost to universities.” 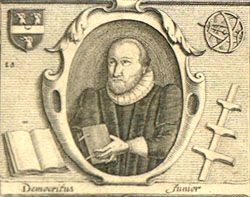