From Diogenes of Laertius on Antisthenes the Cynic

“When a friend was complaining to him that he had lost his notes, he said “You should have inscribed them on your soul and not on paper.”

On recognizing a failed state

“States fail when they cannot distinguish fools from serious men”

“When brothers agree, he used to say, no walls are stronger than their shared life. The right clothing, he said, is that which survives the water with you when you’re shipwrecked. When he was reproached for spending time with wicked men, he said “doctors always hang out with the sick and don’t get a fever!” He used to say that it was strange that we separate the wheat from the chaff, the useless in war, but we do not ban wicked men from public life. When asked what benefit he derived from philosophy, he replied “to be able to converse with myself.” When someone asked him for some accompaniment to drinking, he said, “if you play the flute with me.”  When Diogenes asked him for a cloak, he told him to double his tunic over. When someone asked him what was the most important thing to learn, he said, “how to avoid having to unlearn”. He advised that when men were spoken of badly, they should endure it more than if they were struck by stones.” 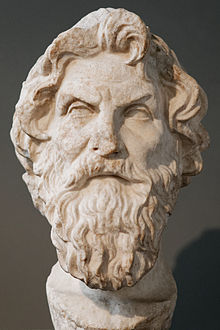 3 thoughts on “Some Anecdotes from Antisthenes”