The Plebeians are duped by the false promise of debt reform:

When Lartius became dictator, the plebeians contrived no revolutionary measures, but found themselves in arms. While the Latins maintained peace in accordance with the agreements, the money-lenders began to treat debtors with violent insolence, and on that account the plebeians rose once again and went to the senate chamber. Everyone would have died therein if some had not already announced that the Volusci were making an attack upon the land. In response to this report, the plebeians departed not with the aim of sparing the senate, but assuming that it would be destroyed by enemies as never before. On that account, they placed no guard on the walls and offered no assistance, until Servilius freed some who were oppressed after defaulting on their loans, and granted exemption from debt collection for as long as they served in the army; he also promised to relieve their debts. Then, in response to these promises, the plebeians went out and conquered the enemy. When, subsequently, the received neither a reduction of their debts nor any other suitable recompense, they clamored again and vented their anger, raising a rebellion against the senate and the generals. 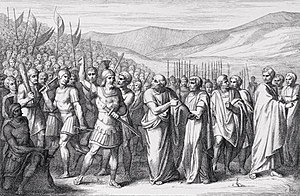