“It is not enough simply to possess virtue, as though it were a skill, unless you use it. Even a skill can be maintained through disuse by knowledge itself, but the entirety of virtue consists of its use, and the chief use of virtue is the governance of the state, and the perfection of all those things which they sound about in the corners of their rooms consists in action, not speech. For, nothing is said by the philosophers (at any rate, nothing true and honest), which has not been imparted and confirmed by those who have written the laws for their states. For, from whence comes piety? Or from whom comes religion? From what source springs the law of nations or even this law which is called ‘civil’? Where do justice, faith, and equity come from? Whence modesty, continence, the avoidance of shame and the pursuit of praise and honor? Whence bravery in deeds and dangers? To be sure, it comes from those who established some of these things by instruction and some by custom, while sanctioning the rest through the laws. They even say that Xenocrates, that eminently noble philosopher, was once asked what his students should pursue; he responded that they should learn to do of their own free will what they were compelled to do by the laws. “ 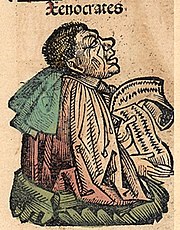