It’s That Day, time to conclude this series in time for tricking, treating, and ghosts. We left matters with hungry ghosts on the floor. Now to finish that, and move on to the religious overtones.

Believe it or not, a dirty floor could be an art form in antiquity. The third century BC artist Sosos was famous for a mosaic of same:

“The Greeks were the first to introduce paved floors, which they decorated with painting until mosaic took its place. The most celebrated worker in mosaic is Sosos, who laid the floors oof a house in Pergamon, known as the Unswept Floor(asaroton oecon), because he represented in small bits of many-colored mosaic the scraps from the table and everything that is usually swept away, as if it had been lying on the floor. Among these mosaics is a marvellous dove drinking and casting the shadow of its head on the water. Other doves are pluming their feathers in the sun on the lip of a goblet.”
Pliny the Elder, Natural History, 36.184

There are possibilities here. A virtuoso mosaic. A joke. Apotropaic, feeding the ghosts so the banqueters can enjoy their feed without worries of spiritual turbulence at their feet. Many are the argunents for various combinations of those choices, but the last, that the floor was apotropaic, remains the most plausible. Especially in light of the many copies of it which existed. Here is one of them: 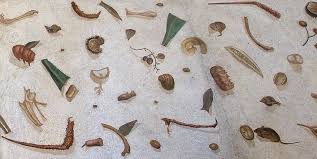 As for this time of the year. Some of you will know that tomorrow, November 1, is All Saints’ Day, and the day after that, November 2, is All Souls’ Day. So what?

Here’s the What. All Saints Day was not originally in November at all. On May 13, AD 609, Boniface IV got busy:

In this time he sought permission from the emperor Phocas to rededicate the Pantheon as Church of the Blessed Mary and All Martyrs, to which church the emperor made many gifts.
Liber Pontificalis 1.317-8 Duchesne
eodem tempore petit a Focate principe templum qui apellatur Pantheum, in quo fecit ecclesiam beatae Mariae semper virginis et omnium martyrum; in qua ecclesia princeps dona multa obtulit.

May 13? The last day of the Lemuria! That’s no coincidence. First, another Christian festival, The Chair of St. Peter, had already been inserted into the calendar on the same day of February in which the other great Roman death festival, the Parentalia, took place. Religious competition, that’s what it is. People were still taking part in those festivals, otherwise there would have been no need to place them at precisely those times. And this agrees with what is already well known, that Christianity did not Conquer with Constantine, but merely became a legal religion. Various polytheistic observances still commanded a majority of followers, and many of the festivals continued until well into the Middle Ages.

In the 8th century AD Gregory III moved All Saints’ Day to November 1, and in the late 10th century AD All Souls Day was created on the following day, November 2. Why November 1? Easy, the Celtic festival of the dead, Samhain, took place then. And the day before November 1 was All Hallows Eve. So today is really the runup to All Saints’ Day.

When you think ghosts and tricking and treating today, think Lemuria. And do be careful where you walk.

View all posts by spfestus