Lucius Tarquinius moves to Rome; he charms the king and other potentates with his wit, kindness, and money.

Lucius Tarquinius then claimed the throne for himself. He was the son of Demaratus of Corinth, who had fled to the Tyrsenian city of Tarquinia, where he married a native woman; together, they had a son named Lucumo. He received many things from his father, including the fact that he would, on account of being a foreigner, he would never mix with the chief men of Tarquinia, and on this account he removed himself to Rome. Once he arrived there, he decided to change his name while he was changning his city, and so he took the name Lucius Taquinius, from the city in which he had formerly lived. It is said that as he was wandering to the city, an eagle flew down and removed the hat which he wore upon his head; after it ascended into the air and made a great noise, it again descended and replaced the hat on his head; after this occurrence, Lucius Tarquinius entertained no small hopes and set about establishing himself in Rome with considerable zeal and energy. Consequently, it was only a short time before he came to associate with the chief men of the state. He was liberal and profuse with his money, and he won over the powerful men in the city with his wit and keen understanding. He was therefore elevated to patrician status and given a place in the senate by Ancus Marcius, and was made a general; moreover, Ancus entrusted the care of his own children and the throne to Tarquinius. Lucius Tarquinius showed himself to be a good man by giving money to the poor who needed it, and always being ready to help a fellow citizen if necessary. He never did or said a trifling thing to anyone. If he ever received a good turn from another, he extolled the deed, but if he were ever done ill by another, he either made no mention of the harm, or made it sound like a minor thing unworth of notice, and not only did he abstain from chastizing the one who had injured him, but he even did him a favor in turn. In this way, he won over Marcius and the men around him, and earned the reputation of a wise and good man. 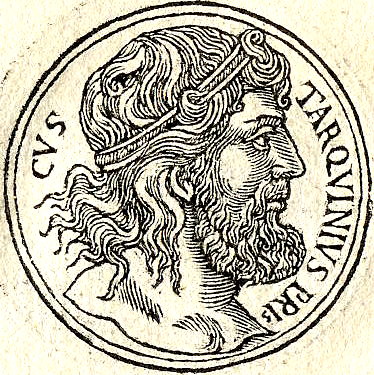