Cosmic edition? As in…immortality. When mortals ask gods about this, the results, predictably, are not good. But since we’re not immortals here, let’s get going. If you’ve not read my earlier post in this series, read it here.

T. S. Eliot’s “The Waste Land” begins at the beginning…with some Latin: 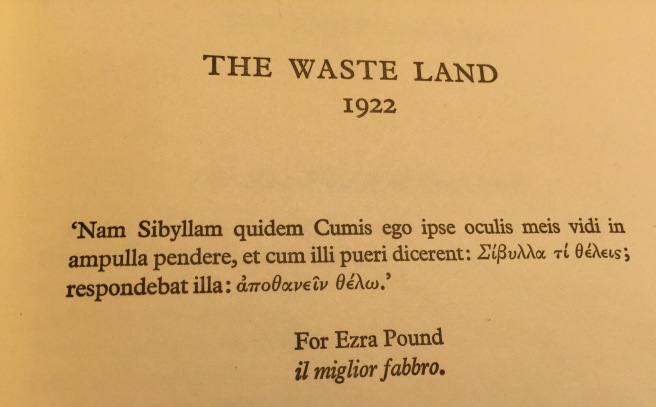 which comes from Petronius’ great fragmentary novel, Satyricon 48.8. Trimalchio, the parvenu with way too much time and even more money, is bombasting as usual:

“Ï once saw the Sibyl at Cumae with my very own eyes. She ws in a bird cage, and when some boys asked “Sibyl, what do you want?” she replied “I want to die.”
48.8

The Sibyl was, among other things, the prophetess of Apollo; she led Aeneas down to the underworld (Aeneid 6), for all the good that did him. But what’s she doing in a cage? And why such doom and gloom? Read on….

Ovid, as usual, has much to say. In Metmorphoses 14, Aeneas is on a speed date with the Sibyl. He learns rather more than her phone number:

“Phoebus Apollo offered me immortality in exchange for my virginity. It happened this way. Apollo was ever so hot for me and offered me a choice of bribes, saying ‘Maid of Cumae, name your price and I will pay it.’ I pointed to a heap of sand and said Í’ll take as many birthdays as there are grains of sand there.’

Dang me. I forgot to ask for youth to go along with the years. I refused him and, dang me again. I’ve never married, I’m now a old fart, I need a hip replacement and I can’t run the Naples to Cumae 5K anymore. I’ve already done seven centuries, and I’ve got three hundred years to go and… my 401K is shot to hell. Life’s a bitch, and eternal life is even worse. I’m going to waste away to almost nothing at all, thinner and tinier even than all those runway models. No one will ever believe that I had once considered dropping for Apollo and, boy that he is, he’ll either not recognize me or else say he never loved me.”

Silly Sibyl. You’ve screwed enough people over with ambiguous prophecies; you expect us to believe you can’t recognize when someone’s doing it to you? Besides, everyone knows that the only god who’s Done It with more mortals than Apollo is Zeus. I’d say “get a life”…but that’s the last thing you need.

Seriously, though. Gloom and doom. Long life isn’t all it’s cracked up to be. But there’s a solution. This time we turn not to a poet but a philosopher. Nietzsche’s Die Geburt der Tragödie (Birth of Tragedy) chapter 3:

“There is an ancient story that king Midas hunted in the forest a long time for the wise Silenus, the companion of Dionysus, without capturing him. When Midas finally succeeded, the king asked what was best of all and most desirable for man. Silenus clammed up but the king could be very persusive. Silenus guffawed; till at last, forced by the king, he broke out with shrill laughter into these words: “Assholes, wretched race of a day, children of chance and misery, why do ye compel me to say to you what it were most expedient for you not to hear? What is best of all is for ever beyond your reach: not to be born, not to be, to be nothing. Since you can’t swing that, there’s a great consolation prize: die ASAP.”

If this isn’t doom and gloom, nothing is. I won’t to contradict Silenus, but leave that to Achilles in Odyssey 11.486-92. Odysseus sees Achilles in the underworld and sucks up along the lines ‘Achilles, you were hotter than hell when alive, and down here you’re still aces.” To which Achilles replies “Mule muffins. I’d rather be a dung beetle and alive than Master of the Universe here.”

Nietzsche’s version comes from a fragment of Aristotle preserved by Plutarch. The more famous Midas story is, of course, that of the golden touch. So well known that it’s otiose to discuss here.

[pedantic aside. Why the beginnings with Eliot and Nietzsche? Simple. I learned the mythologies from them first, before I’d ever read Petronius in Latin or knew enough pedantry to find the source of Nietzsche’s account. Nietzsche, by the way, although famous today as a philosopher, was among the major classical philologists of his day.]

View all posts by spfestus

4 thoughts on ““Looking for truth in all the wrong places…” redux: the Cosmic Edition”