“Close it quickly: it is not a sign of a wise doctor
To chant spells over a wound that needs cutting.”

“You, do what I advise and perhaps you will quickly learn
That even if I am unlucky, I have survived.”

“This is the final word your Ajax ever says
I’ll tell the rest below in Hades to the dead.”

“I am leaving famous Ilion and my altars.
Whenever terrible isolation overtakes a city
The gods’ places turn sick and don’t want to receive worship”

“That famous lord of the Achaeans, Agamemnon
Will make me a wife harder to handle than Helen:
I will kill him. I will destroy his home
And take vengeance for my brothers and father…”

“Their army has earned this kind of praise:
Silence is better for shame, may my Muse
Never be a singer who recalls their terrible deeds.”

“Listen how it is with Hektor’s mournful tale:
He died, leaving a reputation as the best man.
The coming of the Greeks made this happen.
If they had stayed home, his value would have stayed hidden.”

“You fear a child this young? I can’t praise fear
When someone is frightened without examining why.”

The week, the month, and the day have been filled with horrors. Here is some potable coping advice from the ancients. N.B. Quotation is not endorsement. Drink safely and with friends.

“But Plato in the first and second book of Laws did not—as was opined by a fool—praise that most shameful drunkenness which weakens and diminishes people’s minds; but he did not dismiss that kinder and a bit friendlier embrace of wine which may come under the influence of good judges and masters of banquets. For he believed that minds were renewed by proper and moderate refreshments for the purpose of carrying out the duties of sobriety and, further, that people were bit by bit made happier and rendered better prepared for pursuing their plans again.

At the same time, if there are any deep  mistakes of desire or affection with in them which a proper sense of shame usually concealed, than these could all be revealed without serious danger and in this be made readier for alteration and treatment.”

Macrobius Records the same bit as Gellius above and then adds:

Plato also said this in the same passage, that we ought not to avoid practices of this sort for struggling against the violence of wine and that there is no one who has ever seemed so constant and controlled that his life would not be tested in these very dangers of mistakes and in the illicit traps of pleasure.”

We can get a bit more explicit:

“Mnestheus of Athens also insists that the Pythia commanded the Athenians to honor Dionysus as a doctor. So Alcaeus the Mitylenaean poet says:

Wet your lungs with wine, for the dog-star is rising.
The season is rough: everything thirsts in this heat.

And elsewhere he says: “Let’s drink, for the dog star is rising.” Eupolis says that Callias is compelled to drink by Pythagoras so that “he may cleanse his lung before the dog star’s rise.” And it is not only the lung that gets dry, but the heart runs the same risk. That’s why Antiphanes says:

Tell me, why do we live?
I say that it is to drink.*
See how many trees alongside rushing streams
Drink constantly throughout the day and night
And how big and beautiful they grow.
Those that abstain
Wilt from the root up.

*A twitter correspondent has suggested that this really means “what is living, it is drinking”. This is definitely closer to the Greek idea; but I kept mine because I think it is punchier in English. Get it, punchier?

And I am a fan of this one too:

“I am calling the prudent philosophers here,
Those who never allow themselves anything good,
Those who seek a thoughtful man in every walk
And in their discussions as if he were a fugitive slave.
Wretched person, why are you sober if you have money?
Why do you dishonor the gods this much?
Why do you think money is worth more than you are?
Does it have some intrinsic worth?
If you drink water, you’re useless to the city.
You hurt the farmer and the trader at the same time.
But I make them wealthier by getting drunk.”

“It is not possible to find medicine to bring life to the dead.”

“Since we both need consolation, may we be solace to one another.”

Attributed to Socrates (in Stobaeus)

“The sick need doctors; the unlucky need encouragement from friends.”

Prior to the spread of Christianity, Romans and Greeks had somewhat different attitudes on suicide from our own, but they were by no means consistent and harmonious. Some–like Aristotle in his Nicomachean Ethics–viewed suicide as cowardly. Roman authors like Cicero and Seneca go far to the other direction, seeming to glorify it at times while granting the act far greater complexity on other occasions.

For those of us who have suffered from depression or have lost loved ones to substance abuse or suicide, ancient comments on suicide and mental health can provide little comfort. Greek and Roman attitudes on the subject are important to reckon with, however, for the very reason that they can seem so different from our own.

The Ancient touches upon ours but does not necessarily need to define it. The boundaries of life and death cannot be crossed again. If you or someone you know feel alone, uncertain, depressed or for any reason cannot find enough joy and hope to think life is worth it, please reach out to someone. The suicide prevention hotline has a website, a phone number (1-800-273-8255), and a chat line. And if we can help you find some tether to the continuity of human experience through the Classics or a word, please don’t hesitate to ask.

“This diversity of charactertistics has so much power that it may be required for one person to bring about his own death but forbidden for another. For wasn’t Marcus Cato in one kind of need and others were in different situations when he gave himself up to Caesar in Africa? Perhaps there would have been condemnation of the others if they had killed themselves because their style of life and their habits had been easier while life granted Cato an unbelievable seriousness which he himself strengthened through unending dedication as he remained always persistent in his plans and his decisions. He had to die before gazing upon the face of a tyrant.

Think of how much Odysseus endured on his prolonged journey when he even served women—if Cicero and Calypso must be called women—and he labored to be likable and pleasant to everyone in every speech! Indeed, once at home he even put up with the insults of slaves and slave-girls so that he might finally come to the end he desired. But Ajax—thanks to the spirit he is given—would have preferred a thousand deaths to such indignity.”

“They deny that Diodorus the Epicuruean philosopher who in recent days took his own life with his own hand was not obedient to Epicurus when he cut his own throat. Some would wish that this deed be seen as insanity, others as fear—but he, at the same time, announced that he was happy and full with good conscience as he left life. He praised the time of life spent peaceful in port at anchor and spoke words which you have heard unwillingly as if you must do the same: “I have lived and I have completed the course fortune gave me.”

“Achilles, respect the gods and take pity,
Once you think of your own father. I am even more pitiable,
Since I endure what no other mortal person ever has,
To reach my hands to the lips of the man who slaughtered my child.” 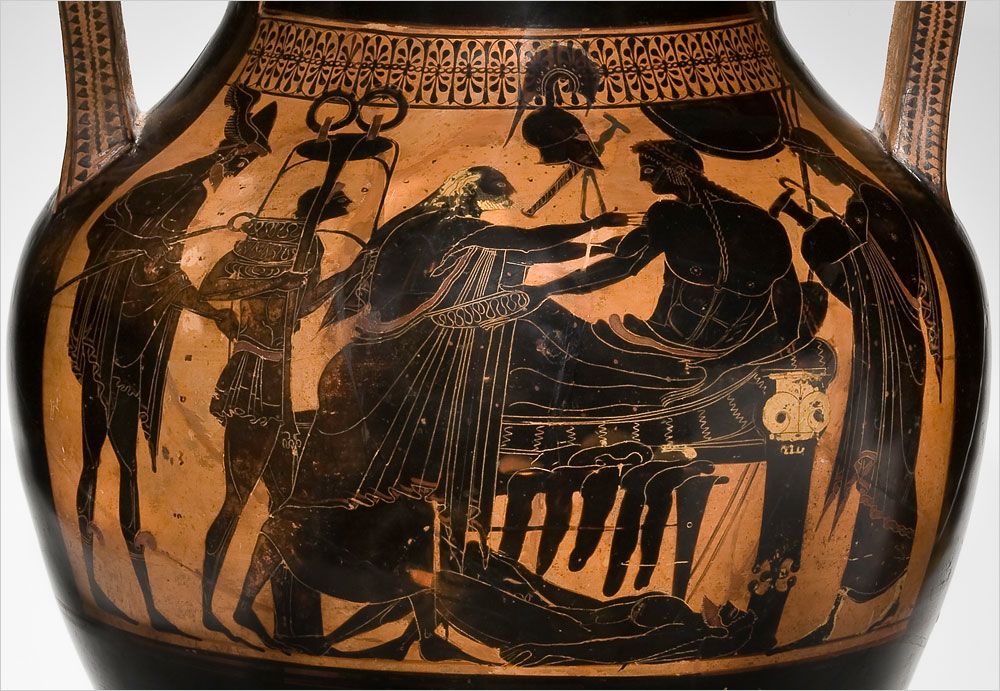 “Do I grieve for myself or the one who died? If I grieve for me, this torment of emotion is useless and sorrow—excused only because it is honorable—begins to depart from duty when it aims for advantage. Nothing fits a good person less than to make grief for a brother an issue of calculation.

If I grieve on his account, then one of the following two judgments must be true. For, if the dead have no feeling at all, then my brother has escaped the misfortunes of life and has returned to that place where he was before he was born where he is free of every evil, he fears nothing, desires nothing, endures nothing. What madness this is to never stop grieving for someone who will never grieve again?”

Talking Heads, “This Must be The Place (Naive Melody)

“…There was a time before we were born
If someone asks, this is where I’ll be…”