“What mortal person will escape
A god’s crooked deception?
Who steps with a light enough foot
To leap away through the air?
For destruction is at first friendly, even fawning
As it draws someone aside into a trap
From which it is impossible for any mortal to escape
Or even avoid.”

“Light does not shine on the poor no matter how strong they are
Nor do the masses honor undefended wealth.”

“I have been silent for a while, struck with pains
By these evils. The disaster runs over all bounds
of speaking or asking about its suffering.
Still, necessity forces mortals to endure the pains
The gods send us. Pull yourself together,
Tell us everything that happened…”

“This old life has seemed
to have run too long,
To witness such unexpected pain.”

“Friends, whoever gains some practice in troubles
Understands that when a wave of troubles come
We mortals tend to fear everything.
But when a god makes things easy, you think
You’ll always sail under the same favorable wind.”

“You can understand from the two popular lines which Epictetus wrote about himself that the gods do not completely hate those who suffer because of a range of miseries in this life, but that there are some secret causes which the curiosity of a few may be able to sense:

“I, Epictetus, was born a slave with a crippled body
both an Irus in poverty and dear to the gods.

You have, I believe, sufficient argument why the name “servant” should not be despised or taboo, since concern for a slave affected Jupiter and because it turns out that many of them are faithful, intelligent, brave, and even philosophers!” 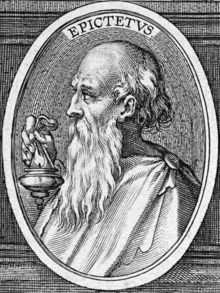 “Therefore I do not suggest that you be indifferent. Rather, you should avoid whatever makes you fear. Whatever can be anticipated through planning, anticipate. Whatever would do you harm, spot it and avoid it long before it happens. In this, confidence and a mind hardened enough to tolerate everything will bring you the greatest aid. Whoever can endure fortune, can also beware of it. Certainly, there are no rolling waves on tranquil waters. Nothing is more pitiful or foolish than fearing things ahead of time! What is this insanity in anticipating your troubles!

Finally, to summarize briefly what I believe and to outline for you those troublemakers and self-abusers—for they are as intemperate in their misfortunes as they were before them. The person suffers more than is needed who suffers before it is needed. This kind of a person does not put his sorrow in perspective for the same reason he does not expect it—because of the same intemperance he imagines that his own happiness will last forever and that whatever he encounters will continue to improve as long as they last. Forgetful of the balance upon which all human affairs are chanced, one safeguards for himself only the consistency of chance.”

“The race of man complains wrongly about its nature, namely the fact that it is feeble in strength, limited in years and ruled more by chance than virtue. To the contrary, you can realize through contemplation that nothing else is greater or more extraordinary—that human nature lacks only perseverance instead of strength or time. The leader and ruler of mortal life is the mind. When it proceeds to glory along virtue’s path, it is fully powerful, potent and famous; it does not need fortune since fortune cannot grant or revoke honesty, perseverance, or any other good quality from any man. But a mind seized by desires is dedicated to laziness and worn by obedience to physical pleasure; accustomed to ruinous temptation for too long, when, thanks to sloth, strength, age and wit have diminished, only then is the weakness of nature at fault. Every man shifts his own responsibility to his circumstances.”

I can’t help but thinking that maybe Sallust had read (or heard) the beginning of the Odyssey where Zeus complains that Aigisthus ignored divine warnings (1.32-34)

“Mortals! They are always blaming the gods and saying that evil comes from us when they themselves suffer pain beyond their lot because of their own recklessness.”

But, of course, there is a typically eclectic blend of Roman philosophy in Sallust’s statements: some Stoicism, an echo, perhaps, of Empedocles and much more….

“Some are slaves to desire, others to greed, others to ambition; all are enthralled to hope, all to fear. To be sure, there is no slavery more base than one voluntarily undertaken. But we walk all over the man subjected to the yoke imposed by fortune as though he were a wretched and worthless character, but we do not suffer the yoke which we place upon our own necks to be jeered at. You will find among servants one with a deeper purse than the others, you will even find a lord himself kissing the hands of another man’s servants in the hope of financial gain; I do not, therefore, form my opinion of people based on their fortune, but on their character. Chance assigns you a condition, but you give yourself a character.”

“Why does nature nourish and increase the races
of horrible beasts, enemies to humankind on land and sea?
Why do the seasons of the year bring diseases?
Why does an early death come suddenly?
So a child, just like a shipwrecked man tossed by savage waves,
lies naked and speechless on the ground needing everything required
to support life at the very moment when nature pours him
from his mother’s womb into the world of light,
he fills the room with a sorrowful wail, as if he knows
the measure of troubles that still remain for him to endure in life.”

[Today the Almeida Theater in the UK is presenting a live reading of the Odyssey. Duly inspired, we are re-posting some of our favorite Odyssey themed posts]

“You seek a thought-softening homecoming, Odysseus: but the god has made it hard for you, since I do not think that the earth-shaker will forget anger he set in his heart, enraged as he is because you blinded his dear son. But still, even now, though you have suffered evils, you may come home, if indeed you wish to save your own life and your companions. When your well-made ship first nears the island of Thrinakia as you wander over the dark sea, you will find the cattle and fat flocks of Helios who oversees and witnesses everything. If you leave them alone and think of your homecoming, then you will return to Ithaca, even though you have suffered evils. If you harm them, that will be a sign of ruin for your ship and companions. Even if you survive yourself, you will come home badly, after losing all of your companions, and you will find pain in your house: arrogant men who consume your household, suitors of your godly wife and bringers of bridegifts.”

The divine actions are positioned as reactions to human action (itself unmotivated by the divine). So if Odysseus had not angered Poseidon then they would not end up on Thrinakia where his companions would not have the option to anger Helios by eating his sacred cows.

All of this is in accord with Zeus’ opening statement in the Odyssey where he complains that Aigisthus ignored divine warnings (1.32-34)

Mortals! They are always blaming the gods and saying that evil comes from us when they themselves suffer pain beyond their lot because of their own recklessness.

Solon, (fr. 11 1-4) seems to echo Zeus’ comments from the Odyssey (that men are always blaming the gods).

“If you have suffered grief through your own wickedness
Don’t blame the gods for this fate.”

The later Presocratic Critias (fr. 10.3) is more explicit in his play Pirithous:

“Fortune is a friend to men of good sense.”

This is no Terminator ethic (“no fate but what we make”) but it is a long way off from oracular predestination!

“A man speaks [fatur] who first releases from his mouth a sound that has a meaning. From this, children are called infants [lit. the ‘unspeaking’] before they can do this; when they can do this, they are said “to speak”. Then, the words ‘soothsayer’ [fariolus] and ‘prophet’ [fatuus] are made based on similarity to a child’s speech. Because of the fact that the fates set the lifetime for a child by “speaking” [fando], the words ‘fate’ [fatum] and ‘fateful’ [fatales res] have developed. From the very same word, those who speak easily are called “eloquent” [facundi dicti] and those who are in the habit of uttering the future by sensing it beforehand are called “speakers of fate” [fatidici] and are also described as “speaking prophecy” [vaticinari] because they do this when their mind is in a frenzy: but this will be addressed later when we talk about poets.”

Plutarch, On The Tranquility of Mind, 467 C-D

“Thoughtful men–just a bees have find honey in thyme, the most bitter and driest plants–extract something fitting and useful to themselves even from the most adverse situations.

It is necessary that we practice and take care of this first, like the man who missed a dog with a stone but struck his step-mother instead and said “That’s not so bad”. For it is possible to change our reception of chance from undesired outcomes. Diogenes was sent into exile? “That’s not so bad!” For he began to become a philosopher after his exile.”