“Whoever trusts a dishonest man to keep him safe,
Discovers ruin where he thought he would find aid.

When the doves were often fleeing from the kite
And were avoiding death by wings’ rapid flight
The kite turned his plans toward deceit
And tricked the silly race with this conceit:
“Why do you live a live with so much worrying,
When with a simple oath, you could make me king?
I would keep you safe from every harm?”
Believing him, they put their safety in his arms.

Once he gained the realm he ate them one by one
And exercised his power with the harshest talons.
Then one of the remaining doves reflected,
“We deserve this: we gave our life to a criminal we selected.”

“The king, swelling up with rage because of what was said, responded, “You think that I am lying about them, when I have discovered that they are the most disgusting of people who are plotting against me?

And you are saying that they are good people, and serious? Well, I suppose if they were asked about you that they wouldn’t say that you’re a wizard, a madman, a braggart who is greedy and breaks the laws? That’s how evil your conspiracy is, you filthy criminals.

The trial will prove everything. I know how much you all swore under oath, why you did it, when you did it, and what you sacrificed, as if I were there and joined in with you!”

Phaedrus 2.6: The Eagle and the Crow

“Against those in power, no one has enough defense
If a wicked adviser also enters the scene
His power and malice ruins their opposition.
An eagle carried a tortoise on high,
When he pulled his body in his armored home to hide,
And rested hidden untouched by any attack,
A crow came on a breeze flying near them:

“You have well seized a precious prize with your talons,
But, if I don’t show what you need to do,
It will pointlessly wear you out with its heavy weight.”

Promised a portion, the crow instructs the eagle to drop
The hard shell from the stars upon a cliff’s rock.
It would be easy to feed on the broken flesh!

The eagle followed up these wicked instructions
And also split the feast with her teacher.
Just so, the tortoise who was safe by nature’s gift.
Was ill-matched to those two and died a sad death.” “There was a time when all the animals spoke the same language. A mouse who was on friendly terms with a frog, invited him to dinner and led him into a storehouse of his wealth where he kept his bread, cheese, honey, dried figs and all of his precious things. And he said “Eat whatever you wish, Frog.”

Then the Frog responded: “When you come visit me, you too will have your fill of fine things. But I don’t want you to be nervous, so I will fasten your foot to my foot.” After the Frog bound his foot to the mouse’s and dragging him in this way, he pulled the tied-up mouse into the pond. While he drowned, he said “I am being corpsified by you, but I will be avenged by someone still alive!” A bird who saw the mouse afloat flew down and seized him. The Frog went aloft with him too and thus, the bird slaughtered them both.

Note 1: ὁμόφωνα τὰ ζῷα, “common animal language”: It is unclear whether, in these halcyon days before the fall from linguistic harmony, a Frog would squeak or a Mouse would croak when in the other’s company.

Note 2: ἐμπλήσθητι τῶν ἀγαθῶν :”you will have your fill of good things”. If the Mouse knew his Pindar (῎Αριστον μὲν ὕδωρ, 1.1), he would suspect that the Frog will do what in fact does, which is to fill his lungs with water. This illustrates that good things are in fact relative. A Mouse and Frog will hold different things dear.

This fabula (and more!) appears in our book on the Homeric Battle of the Frogs and Mice. This is a periodic reminder that it exists: Here is Bloomsbury’s Homepage for the book.

“A wolf and lamb arrived at the same stream
Compelled by thirst. The wolf was standing above it,
And the lamb far below. Then with wicked jaw agape
For a bark the wolf began to argue his case:

“Why”, he asked, “did you dirty up the water that
I am drinking?” The little lamb responded in fear:

“Please, how can I have done what you have accused, wolf?
The water runs from you to my jaws.”

Rebuffed by the strength of truth, he said,
“Six months ago you maligned my name.”

The lamb responded, “But I was not yet born!”
The wolf said, “By god, then your father did me wrong.”
And he then he killed the lamb by tearing him to pieces.

This fable has been written against those men
Who oppress the innocent for trumped-up reasons.” 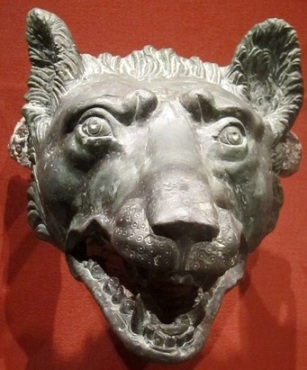 For more, go to mythfolklore

END_OF_DOCUMENT_TOKEN_TO_BE_REPLACED

“A person of learning always has wealth on on their own.

Simonides, who wrote exceptional lyric poems,
Thanks to this lived more easily with poverty
He began to go around the Asia’s noble cities
Singing the praise of victors for a set price.

Once he had done this to make a wealthier life
He planned to make a seaward journey home.
For it was on Ceos people claim he was born.
He climbed aboard a ship which an awful storm
And its advanced age caused to break apart in the sea.

Some grabbed their money-belts, others their valuable things,
Safeguards for their life. A rather curious man asked
“Simonides, you are saving none of your riches?”
He responded, “Everything that is mine is with me”

Few swam free, because most died weighed down by a drowning burden.
Then thieves arrived and seized whatever each man carried.
They left them naked. By chance, Clazomenae, that ancient city,
Was nearby. The shipwrecked men went that way.
There lived a man obsessed with the pursuit of poetry
Who had often read the poems of Simonides,
He was his greatest distant admirer.

Once he knew Simonides from his speech alone
He greedily brought him home, and decorated him
With clothes, money, servants. The rest were carrying
Signs asking for food. When Simonides by chance
Would see these men he reported “I said that all my things
Were with me: and you lost everything you took.”

A super fat dog and a wolf once met
Who was asking him where he was fed
To become a dog so big and filled with grease.
“It is a rich man” he said, “who is feeding me”.
“But,” asked the wolf, “why is your neck so bare?”
“there’s an iron collar which wears my skin there,
A collar which my feeder forged and placed.”
The wolf laughed at him and said to his face:
“I say this kind of luxury can go to heck,
The kind of life where iron wears down my neck.”

A fly sat on a wagon buzzing at the mule:
“You’re going so slow: why don’t you want to go faster”
Be careful or I will sink my sting in your neck!”
The mule answered, “Your words are not my master;
I fear this fool who sits at the front of my cart:
He holds me back with flicking whip
And pulls at my face with dripping reins as I start!
So screw off with your arrogant show!
I know where I need to dawdle and when I need to run.”
With this story it is therefore right to mock,
Whoever without action offers empty talk.”